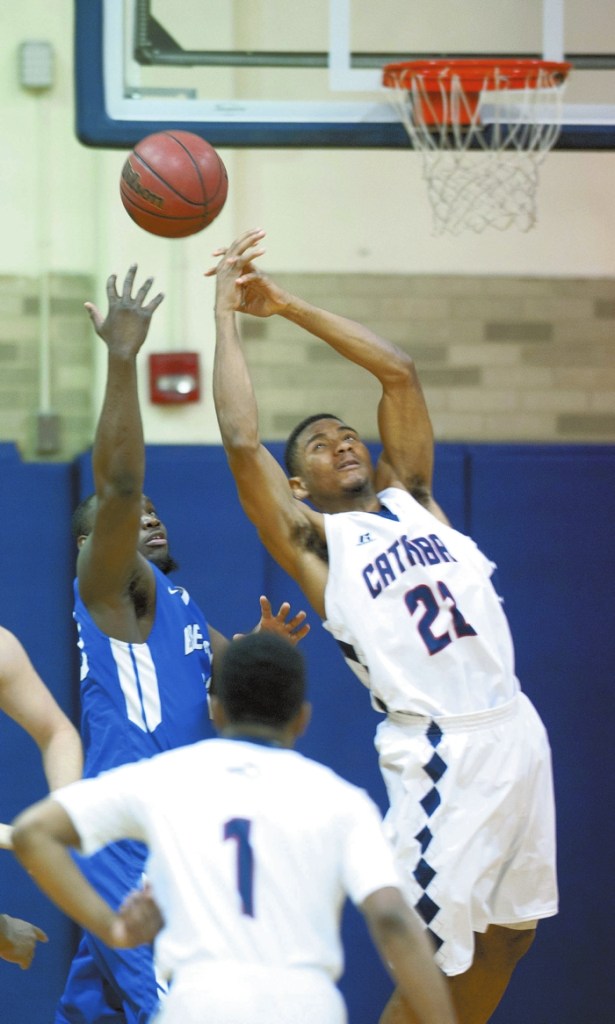 SALISBURY — Injured Catawba guard Rakeen Brown hobbled past coach Rob Perron on crutches in the basement of Goodman Gym, and that told a big part of the story of Catawba’s 87-75 South Atlantic Conference loss to Brevard on Saturday.

It was a home game Catawba (5-8, 3-5) desperately needed to win, but instead the Indians fell for the fifth straight time. Catawba hasn’t tasted victory since Dec. 15.

It was a huge road win for improving Brevard (5-9, 3-5)  in its quest to be one of the eight teams to qualify for the SAC tournament.

“I was really pleased with our energy and we were locked in defensively,” Brevard coach Lee Burgess said. “Catawba is tough to defend. They’ve got some guys who are very good off the bounce.”

A single disastrous possession told the story. Morrison made an athletic steal and had open floor and a sure dunk in front of him. But he mishandled the ball, and Brevard hustled back. Morrison missed a contested layup, and then teammate Troy Warren rushed the easy follow. Then Brevard got two in transition for a killer four-point swing.

“We’ve lost a little confidence,” Perron said. “We were playing great down at Newberry Wednesday and we were up after 10 minutes  when Rakeen went down. Without Rakeen, we can still win, but roles change. We’ve got to get back to the lab and reinvent ourselves.”

Brevard came out on fire from long distance.

“Everyone started hitting 3s,” said Brevard senior Darius Moose, the former Carson High standout. “I missed a layup early in the game, but guys picked me up.”

Catawba went ice-cold, missing a series of point-blank opportunities, and Brevard outscored the Indians 20-10 the last seven minutes of the first half to lead 44-32 at the break.  By halftime, the Tornados (5-9, 3-5) had made nine 3-pointers.

“We were a little slow on some double-teams in the post and they did a great job of catching the ball with their feet already set and making 3-pointers,” Perron said.

Catawba defended the 3-point line much better in the second half, but the damage was done. Catawba’s 12-point halftime deficit swelled to a 20-point hole in the second half before the Indians made a run. A 3-pointer by Reggie Perkins made it a nine-point game with 4:13 left, but after a few shaky possessions, the Tornados made their free throws.

“We didn’t finish great, but it’s not like we’ve had of lot of 20-point leads to hold onto,” Burgess said with a smile. “That’s a good position to be in.”