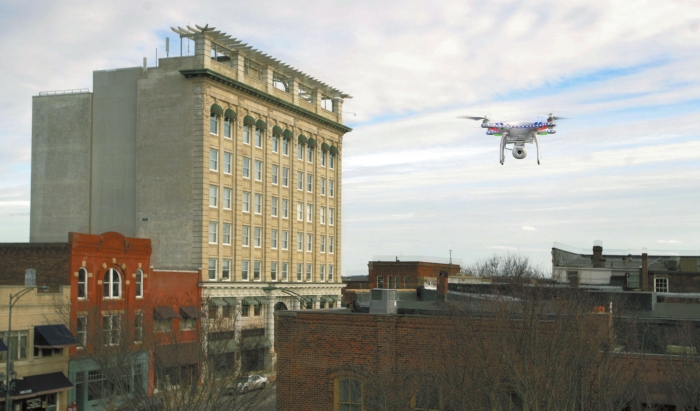 Sometimes, in order to get the best picture, you need to get up high.

And that’s what James Poe does using his remote-controlled drone.

Poe uses his “portable photographic platform,” as he calls it, to capture shots of landscapes, events, and buildings from way up in the air.

His pictures offer a perspective people wouldn’t be able to have unless they were in a plane or helicopter.

Drone technology has grown rapidly in the last decade. Most people associate drones with the unmanned aircraft used by the military. But the  personal and commercial use of drones has become more and more common in recent years as the technology has advanced and costs have come down.

Poe’s been using “PPPs” for two years, but he’s been flying remote-controlled devices for much longer.

Poe, 65, has been flying remote controlled planes and helicopters since he was 21. He said he was one of the first people in the country to fly RC helicopters and went around the country flying them at exhibitions in the mid-1970s.

Poe has lived in Salisbury since he was young. He works in real estate and also owns Rowan Monuments, which sells grave headstones.

He said he currently has three drones and six RC airplanes.

He doesn’t like to call them “drones,” he said, because people associate drones with killing.

The one he demonstrated for the Post is called a “Phantom 2 Vision” and is made by a Chinese company, DJI. It’s a little bigger than a basketball, weighs 4 pounds and can be held with one hand. The body is made of plastic, with four electric motors that each power a propeller. The camera is attached to the underside of the body.

The controls look similar to ones for remote-controlled cars. There are two joysticks. The one on the right controls direction — left, right, forward and back — and the left joystick controls vertical movement. There is an antenna on the controls that sends and receives singles from the drone.

A mount for a smartphone is attached to the controls. An app on the phone is used to control the copter’s camera, which shoots video in 1080p resolution and pictures in 14 megapixels.

The shape of the camera’s lens adds a curvature to the pictures.

The copter can connect to multiple GPS satellites, and waypoints can be set up using the app on the phone. If the copter gets lost, there’s a “return home” setting that allows the copter to automatically return to a preset location.

The copter can also hover, allowing the pilot to easily control the camera to get a good shot.

Taking pictures with RC devices isn’t anything new, Poe said, it’s the technology that has changed.

Today, the level of sophistication is astounding, he said. “I can do it all because I can see what I’m shooting through my cell phone.”

He said the biggest change is that the devices are now battery powered. The battery life on his Phantom is about 20-25 minutes.

A Phantom 2 Vision costs about $800. But depending on the size and level of sophistication, personal drones can cost as much as $7,000, Poe said.

The drone will go so high you can’t see it, Poe said, adding it can reach elevations above 1,000 feet. He added that Federal Aviation Administration rules state personal drones can’t be flown above 400 feet.

The rise in the use of drones by the general public has resulted in a push for rules and standards to be put in place that regulate the use of small, unmanned aircraft. Poe said he thinks people will eventually need a license to fly them.

Poe has shot beautiful pictures of the coastline at Myrtle Beach, S.C., and filmed footage of this year’s Holiday Caravan Parade. He’s help people and businesses save money by taking aerial photos for them so they don’t have to hire a pilot and use a plane to get the pictures.

Some of his pictures have been published in the Post.

He said his favorite location for pictures is downtown Salisbury.

He enjoys the satisfaction he gets when flying his copters, and he always likes to talk with people who come up to him with questions.

“It’ll always be a hobby to me,” he said, adding he feels like a kid again each time he takes his copter out of its case.