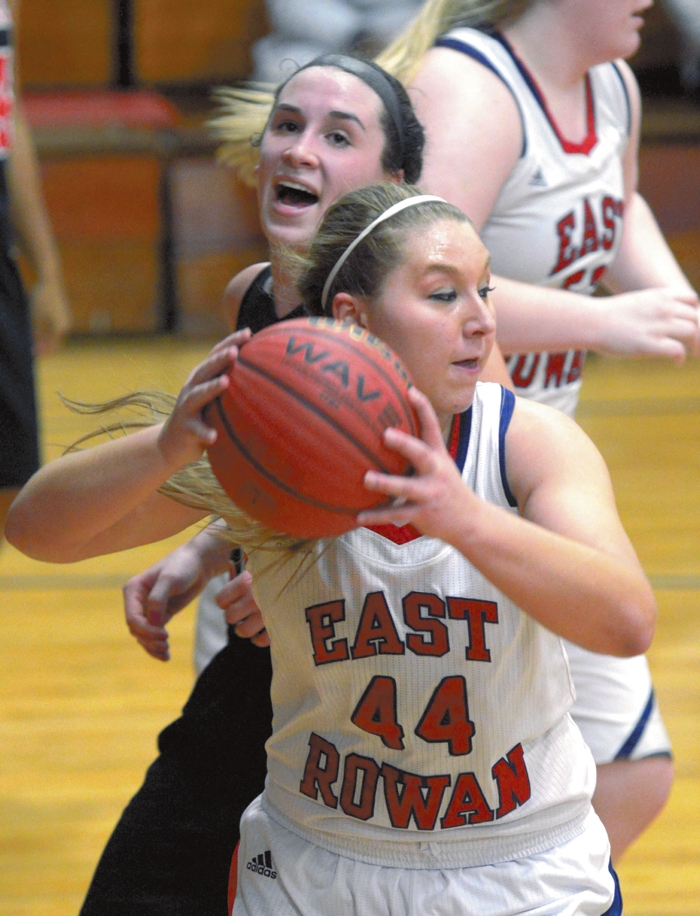 GRANITE QUARRY — East Rowan coach Danielle Porter viewed Friday’s showdown with South Rowan as the most important game of the season to date, and her players answered the bell in a wild 58-54 win.

“It’s just going to be a battle anytime it’s South against East,” Porter said. “That’s just how it is.”

There wasn’t anything smooth about it. The Mustangs got four 3-pointers from Shenell Pharr and double-doubles from Kelli Fisher and Kaleigh Troutman and still had to fight at the end.

“We won the Christmas tournament, but then we had a letdown game and lost to Central Cabarrus,” Troutman said. “This had to be a statement game for us to get back up in the standings.”

East Rowan (12-2, 6-2) not only got a big win, it got some help from West Rowan, which upset first-place Hickory Ridge. Now the Mustangs and South Rowan (9-5, 6-2) are tied for second, one game behind the Ragin’ Bulls.

South Rowan got 23 points from Avery Locklear and a career-best 13 points from reserve Malaysia Williams. Locklear scored 10 in the first quarter, as the Raiders jumped on the home team early.

“We started fast, and I thought we’d be able to carry it through,” Locklear said.

The Mustangs erased  their early deficit by pounding the ball inside to Fisher and Troutman. By halftime, the Mustangs led 28-25 and had shot 10 free throws, while the Raiders hadn’t visited the foul line at all.

“Kelli was bodying us, doing what she does,” South Rowan point guard Sylvetta Bost said. “We just had to fight hard.”

Pharr got in the next punch. She started the second half with a tremendous display of shooting.

“I was 0-for-4 in the first half,” Pharr said. “But I came out of the second half pumped up. They were giving me the shot (from the right corner), and they started going in.”

East Rowan needed Pharr’s 11-point third quarter to stay on top because Williams, who had scored 27 points all season before Friday, poured in eight of her own in a hurry.

South Rowan got within 48-43 with six minutes left on a bucket by Williams, but Pharr had one more 3-pointer in her, and she buried it to push the lead back to eight at the 5:30 mark.

“Shenell’s form is flawless, and she’s got the green light all the way,” Porter said. “And if she misses, her sister (Shenique) is there for that weakside  rebound. They’re very different players, but they complement each other well.”

When Troutman scored inside and Amani Ajayi made a free throw, East Rowan appeared to have a secure 11-point lead with three minutes left, but South Rowan wasn’t done. After two buckets by Bost and one each by Chipman and Locklear, the Mustangs’ lead was down to 54-51.

And then Shenell Pharr had to be helped off the court after she was fouled with 35 seconds left scrambling on the floor for a rebound.

“That rebound was the best thing I did,” Pharr said. “My team had to have that rebound.”

Pharr couldn’t shoot her free throws, and Porter sent Lara Drew, who had not been in the game up to that point, to the foul line. Drew calmly made two big ones and then hit another a few seconds later.

“We had a bad game Tuesday,” Pharr said. “But it’s what you do after a bad game that tells  who you are. We came back with a very positive game.”