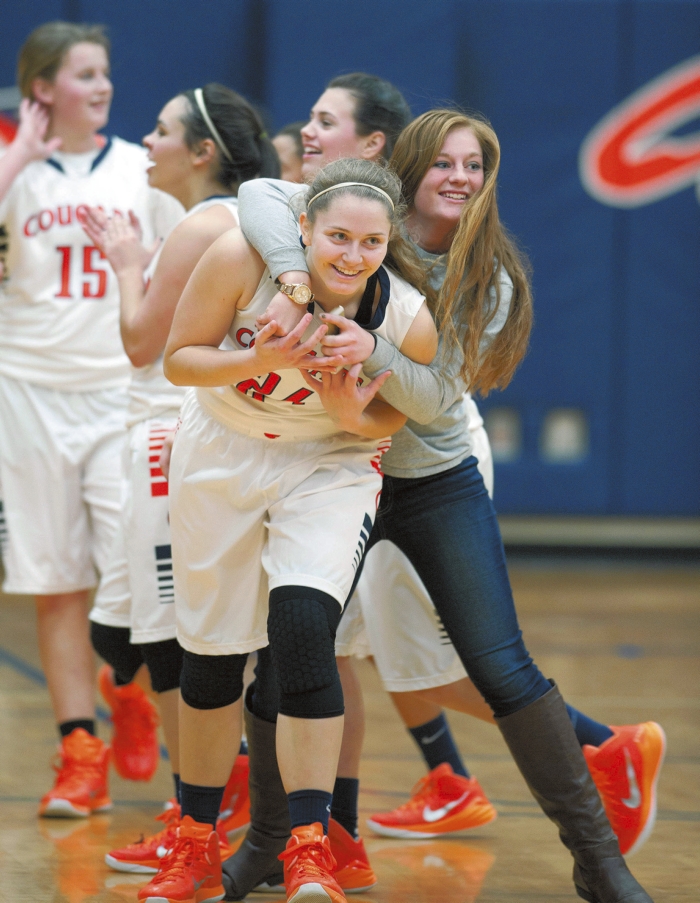 CHINA GROVE — Carson’s Alex Allen is a model of consistency. She is also a pretty darn good basketball player.

The 5-10 senior forward scored 21 points and grabbed 10 rebounds Friday night to lead the Cougars to a 64-30 rout of visiting Cox Mill.  In the process, Allen not only surpassed the 1000 point career mark but also notched her 41st consecutive game scoring in double figures for the Cougars.

The game was an important South Piedmont contest for Carson (7-8, 4-3)  but it became almost secondary after Allen and Sydney Huffman led the team to a 34-15 halftime lead that quickly expanded to 20 and more in the second half. The focus of attention was primarily on Allen who came into the game needing 17 points to reaching the 1000 plateau and canned 12 of them in the first half. A three point play early in the second half put her within two of the mark but four missed shots including two from point blank range sent her to the bench to regroup.

“Maybe I was thinking about it a little bit,” Allen stated of the streak of missed shots. ” But it really wasn’t that big of a deal because I knew I would get it eventually. It just happened tonight.  It just felt really good to have such a big cushion tonight and get the win.””

The suspense was replaced by celebration with just six seconds left in the third period when Allen grabbed a loose ball near the basket and popped in a short jumper for her 1000th point. The game was briefly halted as Coach Brooke Misenheimer presented her with a game ball which she in turned passed on to her parents in the stands.

Misenheimer noted that all of the anticipation coming into the game made her nervous as to how Allen and the team would respond. She didn’t have to worry long as Allen and Huffman started scoring while the team’s new full court press scheme produced 12 steals in the first half.

“I think it is easy to get distracted because you want it so much that it takes you out of your game a little bit,” Misemheimer said. “But I felt like we came out tonight and had the most energy we’ve had in a long while.”

She naturally had a lot of praise for Allen on her special night. “Alex is such a special young lady and more importantly she is an awesome teammate,” Misenheimer said. ” So her teammates wanted this for her tonight.”

Following Allen, Huffman had 13 including a string of six n the third period when Carson pulled away. Freshman Olivia Gabriel had seven points and a half dozen steals. The Chargers (4-9, 3-4) were led by guard Rachel Barker with 12 points, all on three pointers.