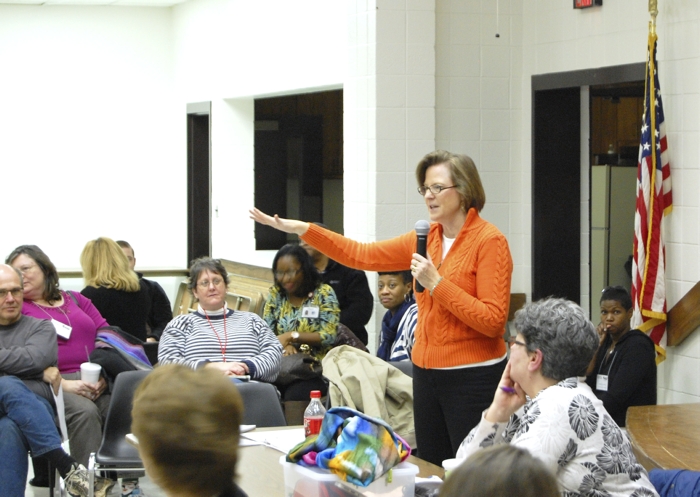 Alexis Coleman, pastor at First United Methodist Church in Landis, speaks after a poverty simulation that was held for the county's social workers and nonprofits.

She lives with her twin sister, Penelope. Her younger brother Pedro is 3, and 21-year-old Pablo is her older brother.

Dad is in jail and won’t get out until next month. Mom isn’t around, and the family doesn’t hear from her.

Dad has a job but can’t work since he’s in jail. There is $100 left from dad’s last pay check and Pablo has a $200 stipend for financial aid because he goes to the local community college.

The $300, and one another, is all the siblings have to get by until dad gets out of jail.

This was the scenario for one of the fictional families portrayed by Rowan County Department of Social Services employees during a poverty simulation Friday afternoon at the county’s agriculture center off Old Concord Road. Non-profit workers from around the county also took part.

The simulation was one month condensed into an hour. Every 15 minutes represented a week. Families had to try to make it through the month — pay the bills, buy groceries, get the children to school, pay the mortgage or rent, go to work or find a job — using the limited money and resources that people living in poverty have.

The simulation was like a small community. There was a school, a bank, grocery store and DSS office. There was a check-cashing place, pawn shop, a utility company, nonprofits offering assistance and a police station. There was even a common criminal selling drugs and stolen items.

People acted out their assigned roles and were allowed to do what they felt was necessary to get by.

By the end of the month, some families had run out of money, had the power cutoff or were evicted. People were laid off. Others were arrested for various crimes such as stealing.

Some families made it through the month OK. Patricia’s family had money left over at the end of the month, but only because her sister stole money from the criminal’s back pocket and Pablo was able to get food stamps from the DSS office.

When the simulation was over, groups discussed the experience.

“Hectic” and “a challenge” were common descriptions. Others said it was difficult to keep the family together and that every time they felt like they were in control something else happened.

Participants said they had to prioritize and keep track of every dollar they spent.

The non-profit workers acted as business owners and resource people during the simulation, and said it was difficult to deal with people who were upset and constantly arguing over money.

Shayla Brown, who played the role of Pablo, called the simulation a “wake up call.”

Donna Fayko, Rowan County’s DSS director, said the goal of the simulation was to help DSS employees understand what the people they serve are going though.

She said it’s important that DSS workers are paying attention to the people and not just the paper work.

One thing that was interesting about the simulation was that people went straight to the DSS, pawn shop and check-cashing place looking for help and fast money, but very few took advantage of the nonprofits or church that offered money, food vouchers and other services.

Some people simply don’t know about the all the recourses available to them. The nonprofit people at the simulation wanted to get this message across to the DSS workers so they’ll remember to tell their customers to look into local nonprofits.

More simulations will be held, and the organizers want to eventually have all of the county’s elected officials participate.

There is no fee for registration, but participants are asked to contribute $20 for the textbook for the workshops.