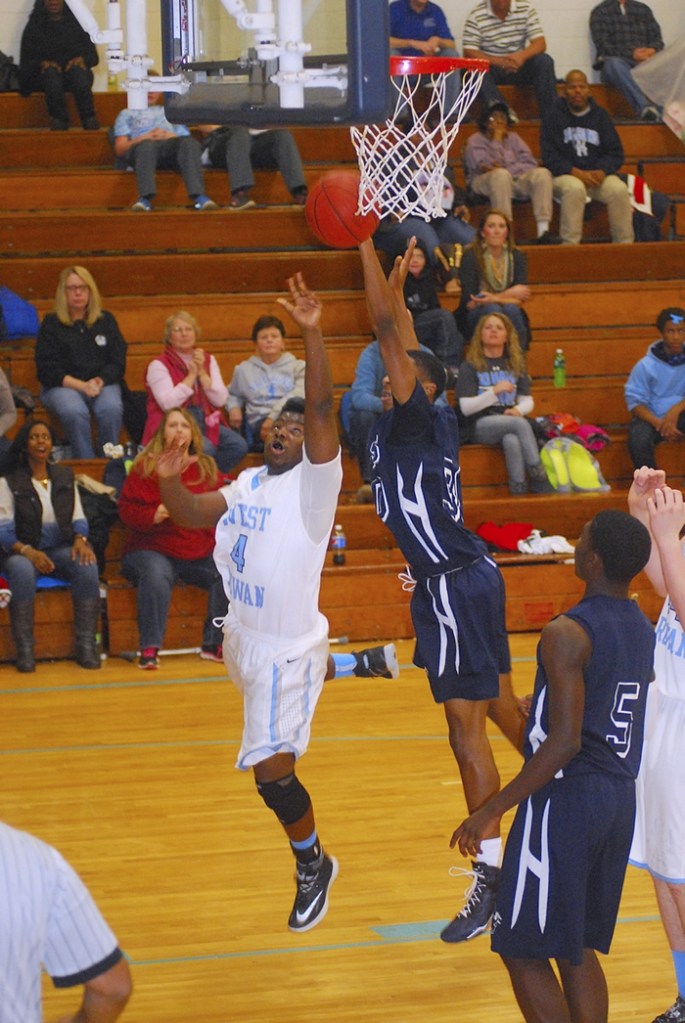 Ten days after clearing the room in the Sam Moir Christmas Classic, the Falcons earned another loud one Friday night when they edged NPC leader Hickory Ridge.

“We played the way we wanted to play – tough,” coach Mike Gurley said after West triumphed 72-70. “We did a good job stopping their dribble-drive. And every time they could have gotten over the hump, we tended to make a play.”

West (9-6, 5-3) made enough of them to hand visiting HR its first conference loss. The Raging Bulls (13-3, 7-1) got headline performances from senior Jaylen Stowe (24 points) and junior Avery Metcalf (23), but couldn’t overcome WR’s lethal outside game.

“We made them jump-shooters tonight,” said losing coach Robert Machado. “And they made jump shots.”

West buried half of its six 3-pointers in the opening quarter, which it closed on a 9-0 run. “We came into the game saying we were going to beat the No. 1 team in the conference,” said West workhorse Greg Joseph. “They had the stats. They had the stars. But we proved them wrong in the end.”

Joseph and teammate Celexus Long each netted 20 points, though each insisted defense was the difference. “We stopped their penetration, their drives,” Long said. “We played help defense. We rebounded the basketball and stopped their transition.”

That formula helped the Falcons surge to 10-point leads on two occasions in the third quarter. First Kortez Weeks took a long, downcourt pass from Long and elevated for an over/under layup that made it 48-38. And with less than a minute on the clock freshman Caleb Mauldin drove the right baseline for a bucket that put West ahead 55-45.

It all evaporated in the final period and when Stowe’s free throw capped a 13-2 flurry with 4:10 remaining, the guests were up 58-57. There were six lead changes in the waning moments, the last when Joseph converted a pair of free throws to put West ahead for keeps, 64-63, with 2:29 to play.

“In the last game against Cox Mill I missed a free throw that would have tied the game,” Joseph said. “That’s what I was thinking about.”

West pushed its lead to 68-63 on a well-defended jumper by Joseph and a couple of clutch free throws by Martavio Rankin with just over a minute remaining. Metcalf’s 14-foot jump shot from the right side — dubbed “a man shot” by Gurley — trimmed the lead to three with 50 seconds to go. Only 12 ticks remained when Long took an inbounds pass from Weeks and motored down the left sideline for a breakaway layup and 70-67 lead.

“He’s an amazing athlete,” Josesph said of Long. “And the fastest guy on the team.”

The outcome was sealed with a miss when Stowe — a Mercer University commit — backrimmed a three from the top of the wheel with four seconds left. Joseph was unable to grab the rebound, but he tapped it to Long who was promptly fouled.

“We’re a go-get-’em team right now,” Joseph said afterward. “We’re not going to back down. You pound us and we’re going to pound you back two times as hard.”