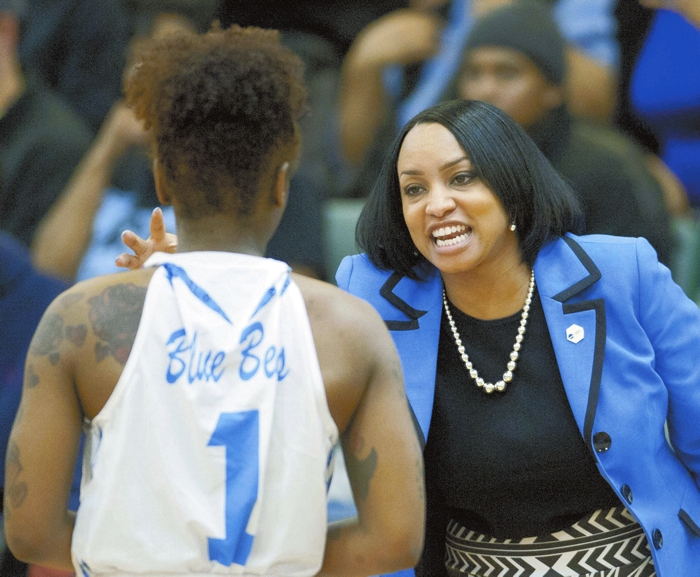 SALISBURY — A sigh escaped the lips of Livingstone head coach Anita Howard in her office at New Trent Gym. The Blue Bears had just beaten Elizabeth City State 58-49 to keep their undefeated season intact. Though, it wasn’t an easy win by any stretch.

“We just sat in the locker room and talked about what we want to do,” Howard said. “We feel like our effort has fallen off. Being undefeated kind of made us slack and they know they have to get back down to the nitty gritty.”

Livingstone (14-0, 4-0 CIAA) led 13-8 in the middle of the first half of Wednesday’s game. Then Jadda Jefferies caught fire for Elizabeth City State.

After starting the game 0-f0r-5 from 3-point range, she nailed 3-of-5 from behind the arc in the latter half of the first half as part of a 17-8 Vikings run. The senior guard’s 3-pointer from the left wing with 6 minutes, 5 seconds left till halftime gave the Vikings a 22-21 lead. She scored 13 straight for during a span lasting more than three minutes.

After going off in the first half, Jefferies was held in check in the second half. She finished with a game-high 22 points.

“We had to adjust because she was a one-man wrecking squad,” Howard said.

Breona Jones was the Vikings’ second-leading scorer with 14 points.

The Blue Bears came out of halftime down 28-25, and it was Wende Foster who provided the spark they needed. She scored four points as Livingstone took a 32-28 lead in the first five minutes of the half.

Foster again provided a pair of important buckets as the Blue Bears built a nine-point lead with 5 minutes left. She knocked down a jump shot from the top of the key that had as much arc as a Sam Perkins jump shot for a 45-38 lead. Less than a minute later, she made a basket and drew a foul. The free throw was no good, but the back-to-back baskets played a major role in giving Livingstone enough of a cushion.

“We have challenged her to not only be a defensive threat, but be an offensive threat as well,” Howard said. “She is answering that call. The defense was keying on Crosby, so (Foster) hit big shots and had a really big rebounding night.”

Foster scored all eight of her points in the second half, and she hauled in eight rebounds. Labrea Walker contributed nine points for Livingstone, and Precious Roberts also had eight.

The Blue Bears have a tough test Saturday. Virginia State (10-3, 2-1) — one of the teams near the top of the CIAA Northern Division — comes to town after losing 65-57 on Wednesday at Winston-Salem State.