Panthers, Newton squaring off with nemesis 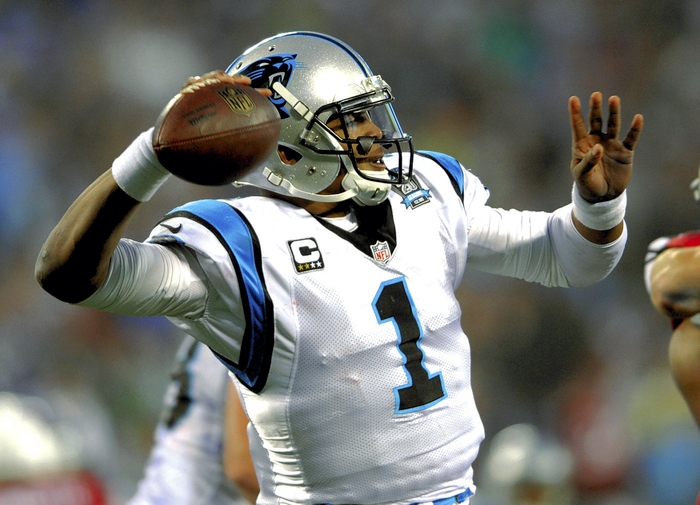 The Associated Press Carolina quarterback Cam Newton (1) looks to pass Saturday against the Arizona Cardinals in the wild card playoff. Next up for Newton and the Panthers is the Seattle Seahawks, a team that beat Carolina in three straight games starting in 2012.

CHARLOTTE, N.C. (AP) — Cam Newton must find a way to beat his biggest nemesis for the Carolina Panthers to advance to the NFC championship game.

The fourth-year quarterback is 0-3 in his career and has struggled to find the end zone against the Seattle Seahawks, Carolina’s opponent in Saturday night’s divisional playoff game.

Newton has led only one touchdown drive in those three losses to the Seahawks.

He’s barely completed 50 percent of his passes and is averaging just 145 yards passing per game. He’s been sacked eight times and three turnovers, including two fumbles. Newton has also been limited to 104 yards on the ground and has not scored a touchdown rushing against Seattle.

“I can’t really put a finger on it,” Newton said of his struggles against the Seahawks. “They have great players and they’re coached extremely well.”

“We’ve just tried to play football and hold on — and we’ve been able to get that done,” Carroll said.

This will be Newton’s first time playing in Seattle, so battling crowd noise will certainly add to Newton’s challenges.

Panthers coach Ron Rivera said he believes Newton will be fine as long as he doesn’t try to force the action against the league’s No. 1-ranked defense.

“He just has to take what they give him,” Rivera said. “I know one thing about him is that he is so competitive and he wants to make things happen, but I think exercising the right type of patience will be good for him.”

Rivera said Newton has shown he can do just that in recent weeks.

While his stats haven’t been spectacular, Newton has gotten the job done and the Panthers (8-8-1) have won five straight games.

“If Cam plays the way he has in some of the games in this past five-week stretch there are some really good possibilities for us,” Rivera said.

Still, odds-makers aren’t giving Newton and the Panthers much of a chance of winning on the road. They opened the week as an 11-point underdog.

Rivera said the Panthers will need to perform better in the red zone to have a chance — something they’ve struggled with most of the season and in past games against Seattle — and not turn the ball over.

Carolina settled for three field goal attempts last Saturday in a 27-16 wild-card win against Arizona and also had three turnovers, two by Newton.

“When I look back at this past game, we had ample opportunities to score,” Newton said. “We had a couple of turnovers, senseless turnovers at that. Me being the number one on the blame list being the leader of this offense, we just have to do better. If we do that, who knows what the game will turn out to be?”

Newton doesn’t anticipate the Panthers doing anything differently than they have been in recent weeks.

They’ve leaned heavily on Jonathan Stewart in the running game the past five weeks and are averaging 196.6 yards rushing per game during that span.

Newton also said he won’t hesitate to throw at Seahawks cornerback Richard Sherman if the opportunity presents itself.

“Don’t get me wrong, Richard Sherman is a top-tier cornerback,” Newton said. “But, if the read takes me there, I have to take it. I’m not going to shy away from it.”

The Panthers may be without speedy wide receiver Philly Brown, which could limit Newton’s options on offense.

The rookie is still recovering from a shoulder injury he sustained against Arizona. He was limited Thursday at practice. Without him, the Panthers lack a deep threat.

The Panthers are taking practice squad player Stephen Hill with them to Seattle in case Brown can’t play, and they decide to add another wide receiver to the 53-man roster.

Brown said he feels well enough to play, but the decision will be up to the coaching staff.