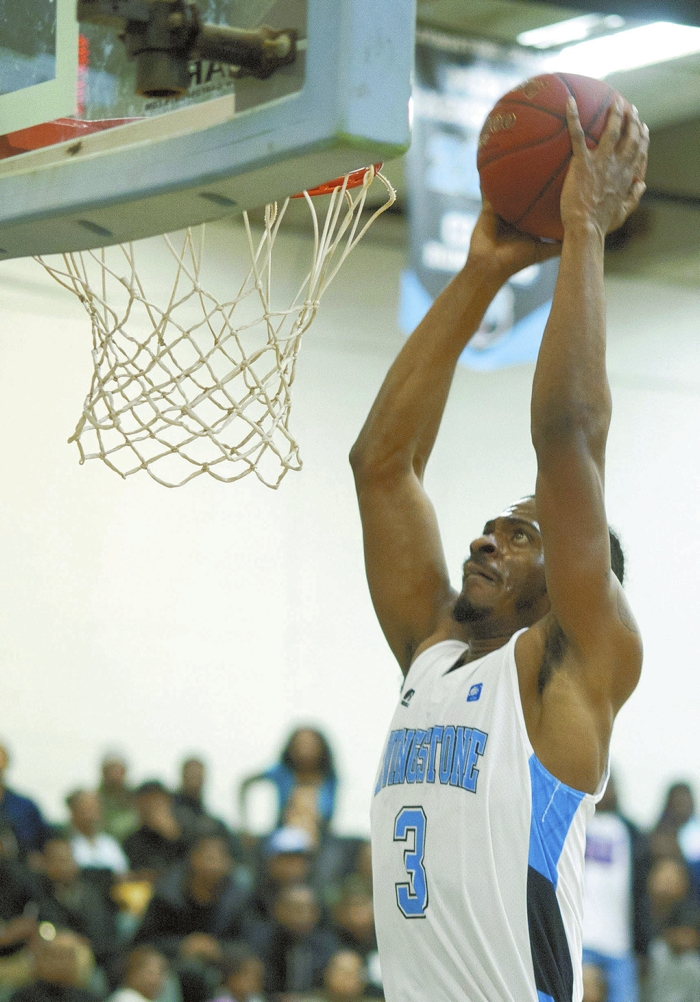 “I actually had nine dunks in a game early this season, so that wasn’t a career high,” said the wide-shouldered Jackson, a 6-foot-9 transfer from Iona. ” It’s just an ongoing process, as we learn each other. They’re looking for me and making good passes, and I’m trying to finish strong.”

Jackson, who  shot 10-for-13 from the floor , scored 24 points, and yanked down 11 rebounds, is a special athlete who forces double-teams. Livingstone coach James Stinson said Jackson made progress Thursday as far as passing out of those double teams, and then re-posting.

Guard Eric Dubose tossed arcing lobs to Jackson that whipped  an overflow crowd into a frenzy. The flashy junior was thrilled that the Blue Bears looked sharp in their belated home opener.

“This place is home, and that’s it — there’s no other way to describe it,” Dubose said. “It’s no different than any other gym in the country, except this one is ours. Here, we wear the light jerseys.”

“The crowd was great — our sixth man,” Jackson added.

Jackson got Livingstone started with two early dunks, but it was an even game for a long time. Both teams shot better than 50 percent in a first half that ended with the Blue Bears leading 37-36.

Livingstone trailed 42-41 three minutes into the second half when Dubose stroked a contested pullup jumper that ignited a 14-2 spurt. Jackson pounded two dunks in that  high-energy flurry, and it was in that stretch that the Blue Bears got repeated stops and took control.

“Elizabeth City State shoots the ball very well, but we did a much better job in the second half of contesting shots and we ran them off the 3-point line,” Stinson said. “We distributed the ball well, got it inside, and we made a lot of plays. Our numbers also were a factor. We played a lot of people. We started wearing them down some in the second half.”

Dubose buried a 3-pointer for a 10-point lead with eight minutes left to stop a mini-rally by the visitors.

Jackson crushed a Dubose lob for a 71-55 lead with 5:47 left that deflated any chance of a comeback by the Vikings and followed it with a soft jump-hook.

“Jackson is  my security blanket,” Dubose said with a smile. “I just throw it up there, and he goes and gets it.”