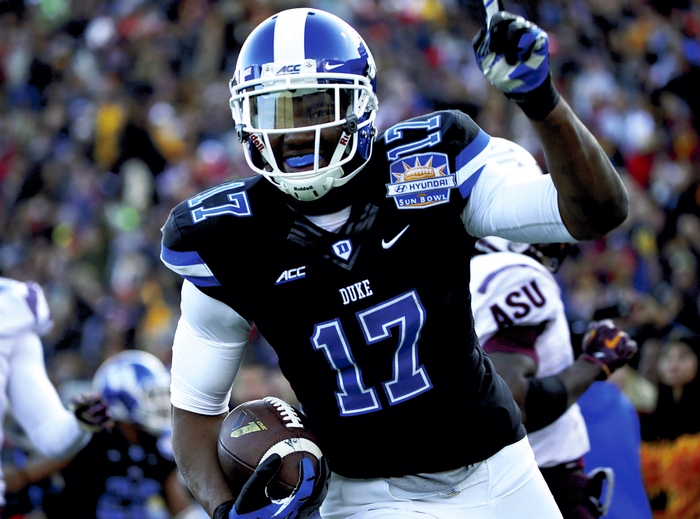 The Associated Press Duke's Issac Blakeney celebrates his touchdown catch during the fourth quarter of the Sun Bowl against Arizona State in El Paso, Texas. Duke lost the game 36-31.

In an interview with The Associated Press on Thursday to wrap up the year, Cutcliffe said he would include Duke (9-4) on the ballot due next week because of “the consistency of our body of work throughout the season.”

He reinforced that Thursday, saying “I don’t think there are 25 teams in the country better than we are.”

Duke started 8-1 and reached No. 19 in the AP poll — its highest ranking in two decades — in November but fell out after two late losses.

Those defeats to Virginia Tech and North Carolina also kept Duke from earning a repeat trip to the Atlantic Coast Conference championship game and sent No. 12 Georgia Tech — which the Blue Devils beat 31-25 in October — to Charlotte instead. The Yellow Jackets took third-ranked Florida State to the wire before losing, then routed No. 7 Mississippi State in the Orange Bowl.

It’s significant that Duke can even put together a legitimate case for a final national ranking, considering how far the program has come: From 1995-2011, the Blue Devils had six seasons with one win — or fewer.

This year they either led or shared the division until the final week of the season, won at least nine games for the second straight year and earned their third straight bowl berth. They were led by a senior class that was the nucleus of the turnaround.

“I don’t think anybody who really knew who we were would keep us out of their Top 25,” Cutcliffe said.

If nothing else, Duke proved it wasn’t a one-year wonder after that run to the 2013 ACC title game.

And the Blue Devils feel they’re positioned to remain contenders in the ACC.

Their top defensive player, safety Jeremy Cash, announced that he would return for his senior season. Two key players who missed this past season after suffering knee injuries in camp — linebacker Kelby Brown and tight end Braxton Deaver — received sixth years of eligibility from the NCAA and will be back.

“I just feel like we have unfinished business in the chapter of the book we’re writing,” Cash said.

Looking ahead, some key questions remain.

One is at quarterback. Thomas Sirk and Parker Boehme are in the mix to take over for two-year starter Anthony Boone, the winningest QB in school history.

Another is at receiver, where Max McCaffrey and Johnell Barnes will be asked to fill in for program mainstays Crowder and Issac Blakeney — just as Crowder stepped up to replace the seemingly irreplaceable Vernon a few years back.

“It’s not like we’re filling Jamison and Issac’s role with people who have never played football,” Cutcliffe said. “The beauty of a good football program is you can replace really good players with newer (ones).”