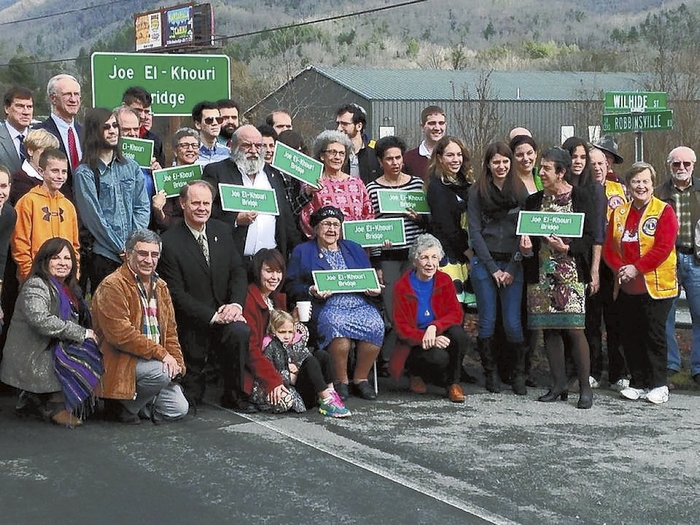 Photo courtesy of the Andrews Journal Members of the El-Khouri family pose for a picture at the end of the bridge dedicated on Dec. 29 to the late Joe El-Khouri in Andrews. Joe’s widow, Rose, is sitting in the middle. Rose and her seven children are holding the smaller bridge signs, including Salisbury’s George El-Khouri (with white beard).

SALISBURY — George El-Khouri remembers how his late father, Joe, often remarked how their Lebanese-American family had three strikes against them when they moved to the mountain town of Andrews in 1955.

They were the town’s first Catholics, first Yankees and first foreigners. There came a time not long after their relocation to Andrews when Joe and his wife, Rose, considered packing up and moving back to Minneapolis, or even home to Lebanon.

But some of the town’s doctors told Joe to give the natives a chance. He did, and Joe El-Khouri became a cherished community leader whose incredibly rich life — made richer by Rose, their seven children and the friends who did business at Khouri’s Department Store for 32 years — was recognized Dec. 29 when the N.C. Department of Transportation named Bridge No. 92 in Andrews the “Joe El-Khouri Bridge.”

Folks such as Chuck VanGorder , the Lions Club, Andrews town council and the Cherokee County commissioners made it possible.

“It was just a real special honor and privilege,” says George, a longtime Salisbury resident. Roughly 100 family members and friends showed up for the bridge’s dedication, including Andrews Mayor Nancy Curtis.

After the dedication ceremony, George El-Khouri took some holy water and blessed the signs on both ends of the bridge, besides the bridge itself.

Joe El-Khouri died in July 2012 at the age of 88. He had operated their family department store in downtown Andrews from 1955 to 1987, and George laughs about his father’s going-out-of-business sale, which lasted at least a year.

The Joe El-Khouri Bridge spans over the Valley River at Robbinsville Road and Wilhide Street. George says he swam in the river near this same bridge as a youngster, and it’s not far from Valley River Park, where he played Little League baseball.

He thinks it’s fitting the bridge is on the road to Robbinsville, from where many working-class people traveled to shop at Khouri’s Department Store. Cherokee Indians also crossed the bridge on their way into town, and his father often had to find an interpreter for his Cherokee customers who couldn’t speak English.

In Andrews, Joe El-Khouri came to fit in — and then some. He climbed the ranks all the way to district governor of the Lions Club, and held important positions with the  United Way, Chamber of Commerce, Red Cross and Boy Scouts.

He and Rose became founding members of the Holy Redeemer Catholic Church. George El-Khouri says the first Catholic mass was said in their home on a Christmas Eve long ago.

Joe El-Khouri also helped to establish the food bank in Andrews. He served on the Western Carolina University Board of Visitors, and he became one of former Gov. Jim Hunt’s secondary road commissioners.

Prior to the bridge dedication, George received a personal note from Hunt expressing his regrets about not being able to attend.

Joe El-Khouri’s loyalty and dedication to the Democratic Party also were noteworthy. If not for Vice President Hubert Humphrey, then a U.S. senator from Minnesota, Joe El-Khouri probably never would have stayed in the United States.

A British intelligence agent and interpreter in the Middle East during World War II, Joe El-Khouri came to the United States from Lebanon in 1949, not intending to stay.

With his English-speaking skills, he was trying to help a fellow Lebanese native negotiate an estate in Minneapolis. After his business was completed, Joe decided he wanted to stay in the States.

He made connections with a man named Fred Gates, who was on Humphrey’s Senate staff, and Humphrey helped with the paperwork that would allow El-Khouri to stay in the country and start the naturalization process. Over the years, El-Khouri became close friends with Humphrey and helped in his presidential campaign in 1968.

Along with Minneapolis, Wilkes Barre, Pa., also had a large settlement of Lebanese-Americans, and that’s where Rose was from. Joe and Rose married, and three of their children were born in Minneapolis, where Joe owned and operated a small food store from 1949 to 1953.

Joe became a U.S. citizen in 1954 and moved to North Carolina in 1955, where the Jabaley branch of the family set up stores in Murphy and Andrews. Joe was asked to manage the Jabaley’s Department Store in Andrews, and for the first 10 years, until he finally bought the store and changed the name, customers often referred to Joe as “Mr. Jabaley.”

The store became Khouri’s in 1965. George said he walked to the store after school and, as a first-grader, started to receive a nickel a day for his help at the store. Mainly, he just watched all the customers. George was boyhood friends in Andrews with Charles Frazier, who would go on to become the nationally acclaimed author of “Cold Mountain.”

One of George’s fondest memories with his father was when both men were delegates to the Democratic National Convention in Atlanta in 1988. They were the only Al Gore delegates in the nation who were Arab-American.

During the Atlanta convention, both of the El-Khouris were featured on the big screen, and George had tears in his eyes, thinking of his heritage, his father’s back story and how proud they were of being Americans.

To honor his late father, El-Khouri ran for delegate again in 2012, when the Democratic convention was in Charlotte.

Joe and Rose El-Khouri were able to send all seven of their children to college. George majored in political science and history at the University of North Carolina-Chapel Hill, where he was part of the Naval ROTC program. He taught English in Lebanon for a year, before embarking on a 30-year career in law enforcement, mostly as a teacher, with the State Bureau of Investigation and the Attorney General’s office.

George retired in January 2005, and he and his siblings made it possible for Joe to travel to Lebanon one more time later that year. On the trip, Joe spent one last visit with his older brother.

Since then, the El-Khouri children who didn’t live in Andrews took turns traveling back home and helping with the care of their parents.

George says the bridge is as much the Rose El-Khouri Bridge as it is his father’s, for she has been family’s glue all these years.