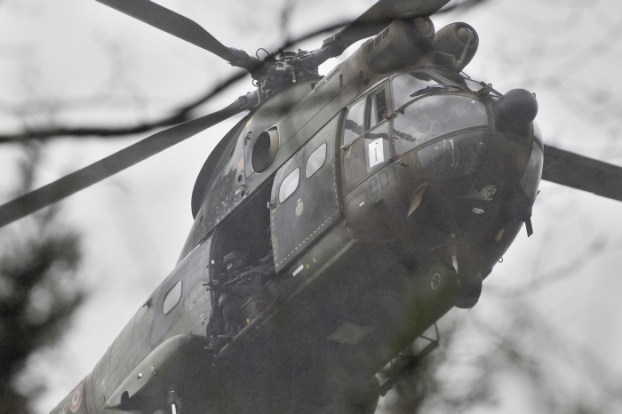 Armed securtiy forces fly overhead in a military helicopter in Dammartin-en-Goele, northeast of Paris, Friday Jan. 9, 2015. French security forces swarmed this small industrial town northeast of Paris Friday in an operation to capture a pair of heavily armed suspects in the deadly storming of a satirical newspaper. (AP Photo/Thibault Camus)

The two brothers suspected of killing 12 people at a French satirical newspaper appear to have taken a hostage in the town of Dammartin-en-Goele.

Security experts say it’s now an Internet-driven, generalized rage against Western society that can burst into the open at any time.

3. GOP-LED CONGRESS CLOSER TO A CLASH WITH OBAMA

House Republicans are on track to pass legislation to authorize the construction of the contentious Keystone XL oil pipeline.

4. AP SOURCES: U.S. DID NOT ‘HACK BACK’ AGAINST NORTH KOREA

It was not immediately clear even within the Obama administration whether rogue hackers or other governments disrupted North Korea’s networks last month.

But administration officials provide no details about the program’s costs or where the money would come to pay for it.

A series chronicling China’s most famous empress returns with no more low-cut necklines, leading to mocking on social media.

Michael Lynton tells AP’s Tami Abdollah about the isolation and uncertainty his entertainment company feels after the hacking attack.

8. WHAT JOKE GOT BILL COSBY A LOUD OVATION

The embattled comedian jokingly warned a woman in the audience during a show in Canada to be careful drinking around him when she told him she was going to the lobby to get a drink.

Smartphone apps on dash displays, cruise control that adapts to cars around it, remote engine starting and more.

Seismologists prepare to monitor another fan-generated “beast quake” at Seattle’s NFL playoff game to test technology that could provide an early warning of underground vibrations.