Program is about veterans, and dogs, helping veterans 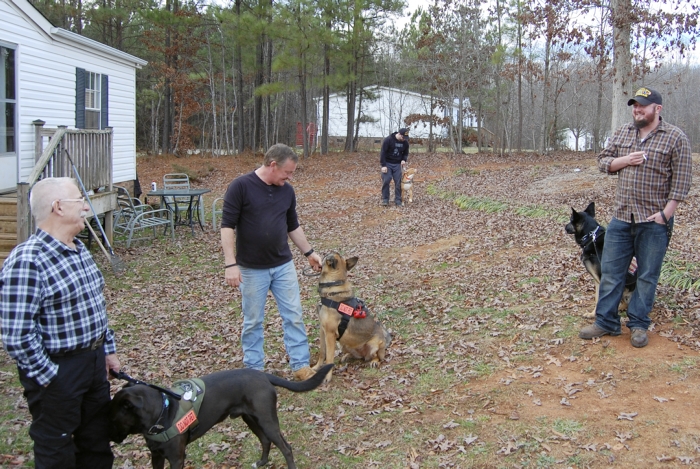 From left to right: Veterans Don Kemp, Robert Johnson, Cody jenkins and Andy Eury with their service dogs outside the home of Barbara Earnhardt in Linwood. Earnhardt trained the dogs and now the group is turning her business into a non-profit to help veterans.

Don Kemp used to never leave home without his gun.

The Vietnam veteran said for 40 years he lived in distress, had anger issues and anxiety, and struggled with relationships. He said his problems were a result of his time in the military.

“It’s like you have a disease, and you know that there is something wrong,” he said.

He said he didn’t feel comfortable in public places and didn’t like being around people.

But life has gotten brighter for Don in the last couple of years since he got Bear, a chocolate lab. And last year, Bear began training to become a certified service dog.

Service dogs are specially trained to provide support, both physical and emotional, for their owners who’ve been diagnosed with a disability. They usually go wherever their owner goes, including places where dogs normally wouldn’t be allowed such as stores and restaurants.

Don said Bear helps calm him down when he gets mad or anxious. “He helps me through that. He recognizes when I’m getting upset,” Don said.

Don said he doesn’t mind eating at restaurants or being around people now that Bear’s with him.

And he doesn’t take his gun with him anymore when he leaves home.

Bear has had eight months of training from Barbara Earnhardt, who has been training dogs for more than 20 years. Don was connected with her through his social worker at the VA Medical Center in Salisbury.

She said she’s trained, or is currently training, about 20 dogs for veterans, and through the process she’s befriended many of the people she’s helped.

Training involves working with both the dog and owner in everyday situations so the pair can become a working team.

Late last year, Barbara decided to turn over the business to the veterans she’s helped and let them turn it into a non-profit.

“I decided what better way to help them out then to turn the program over to veterans,” she said.

Don, along with other veterans who have dogs trained by Barbara, and became friends through her, are helping to run the program. Barbara will continue to the training.

Robert Johnson, who retired from the Army after more than 20 years of service including three deployments to Iraq, is the president. His service dog, Popper, was trained by Earnhardt too.

He said taking care of soldiers is second nature to him.

“This is still my way of taking care of soldiers. That’s how I look at it. That’s what it’s all about,” he said.

The group said the goal of making the business a non-profit is to allow more veterans access to a service dog and a better life. The training can cost thousands, if not tens of thousands, of dollars. But Barbara will be doing it for free.

With more help from her new friends, Barbara can focus solely on the training. Before, she had to handle all the paper work that goes with the business.

Paws 4 Soldiers will help veterans find a suitable dog. They prefer rescue dogs, and provide a leash, crate, collar and enough dog food for a month.

The program will consult individual veterans on whether a service dog is right for them.

Also part of the group are Cody Jenkins and Andy Eury. Cody was in the Navy and spent time in Iraq and Afghanistan. Andy was a Marine and did two tours in Iraq.

They both suffer from post-traumatic stress disorder, or PTSD, and said their dogs have been a tremendous help.

Cody said before getting his dog, Simba, it was hard for him to leave the house.

“For the longest time, I was afraid to even go to the store,” he said.

He’d go grocery shopping in the middle of the night at Walmart.

Now, with Simba at his side, it’s so much easier to be out and about, Cody said, because Simba takes the focus off of him.

Andy got out of the military in late 2012 and came back to his hometown of Salisbury.

“I never felt so low in my life,” he said, adding he was self-medicating and not really living his life.

His friend had a service dog and encouraged Andy to get one. His social worker at the VA told him about Barbara’s service.

He’s had his German shepard, Briggs, for about three months.

Andy said he doesn’t like crowds and that having Briggs around is like having a fellow Marine looking out for him.

Briggs acts as “cover” for Andy. He watches his owner’s back when Andy is out in public.

The men said their dogs provide a service they can’t get through the VA, and the companionship they have with their dog eases their daily anxiety. From left to right, the service dogs are: Popper, Simba, Briggs and Bear.

Meetings are held at Barbara’s home in Linwood and the group does activities, like fishing or bowling, together. They also work to educate the public about service dogs.

Andy said the veterans all feel comfortable around each other and understand what each person is going through.

Paws 4 Soldiers is still in the process of becoming a non-profit. To learn more about the program, visit www.paws4soldiers.com or check out their Facebook page.