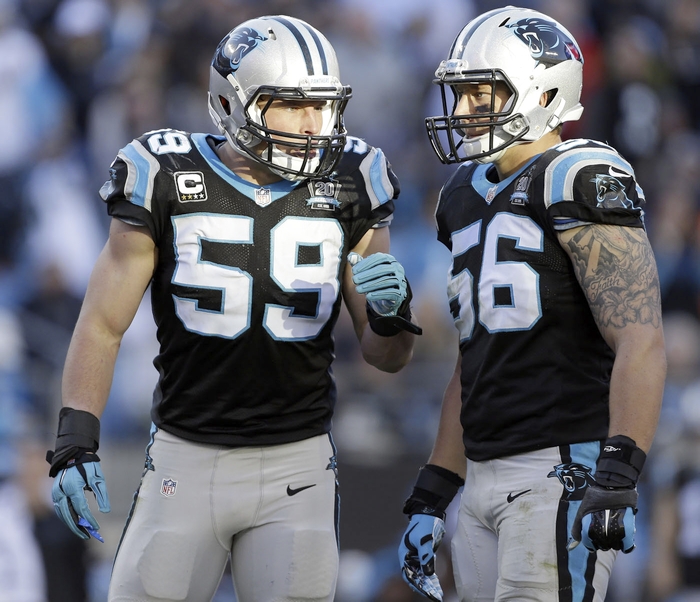 The Associated Press Carolina linebacker Luke Kuechly (59) huddles with teammate A.J. Klein (56) on Dec. 14 against the Tampa Bay Buccaneers. Kuechly and Seattle linebacker Bobby Wagner will be at the center of the two dominant defenses when the teams meet Saturday in an NFC Divisional Round matchup.

CHARLOTTE, N.C. (AP) — Carolina teammates describe Luke Kuechly as one of the nicest guys you’ll meet, an aw-shucks, All-American kid who’s polite and still spends part of his offseason living with his parents in Ohio.

Seattle’s Bobby Wagner is the charming, approachable kid-at-heart, regularly seen walking around with a Teenage Mutant Ninja Turtles backpack draped around his shoulders.

Off the field, nice guys. Harmless.

On the field, it’s a whole different story when it comes to the All-Pro middle linebackers.

Panthers safety Roman Harper, who previously played for New Orleans, remembers watching a game last year and wondering who the crazy man wearing the No. 59 jersey for Carolina was.

“He’s yelling, he’s talking trash — and then you meet him and he doesn’t even remember any of that,” Harper said. “He’s just the nicest guy, he talks about his mom all the time and all this other stuff and it’s just so funny. It really is like the Superman-Clark Kent thing.”

Wagner is the intense driven leader of the Seattle defense, which has finished first in the league in the NFL in each of the past two seasons.

Kuechly was the catalyst for the Panthers holding the Arizona Cardinals to 78 yards in last week’s wild-card game, an NFL postseason record for fewest yards in a game.

“They’re two of the better young linebackers in the league, for sure,” Panthers coach Ron Rivera said. “They’re exciting to watch.”

The past three meetings between the Seahawks and Panthers have resulted in low-scoring matchups, hardly a surprise given the men manning the middle of those defenses. The Seahawks won those games 16-12 in 2012, 12-7 in 2013 and 13-9 in October, although Wagner didn’t play in the most recent game due to a turf toe injury.

“We’re the quarterback of the defense so I think we should get as much recognition as the quarterback,” Wagner said. “(But) it’s a fun position. We’re in the middle of everything. We have a job during the run, have a job on the pass, get sacks, interceptions, tackles. We’re pretty much involved. It’s the best positon in my opinion.”

Kuechly agrees, although he’s fine without the attention.

“It’s all good, and I wouldn’t want to change that,” Kuechly said. “That’s something you take with the position.”

Teammate Greg Olsen called him the best defensive player in the league and said he’s already as good as Brian Urlacher was in his prime.

Both players entered the league in 2012 — Kuechly as a first-round pick out of Boston College; Wagner a second-round choice from Utah State.

Since their arrival, both defenses have vastly improved in part because of their ability to decipher offensive formations, run to the ball and make plays. Both excel in pass coverage, too.

Kuechly, the NFL’s Defensive Player of the Year last season, demonstrated last week just how valuable he is to the Panthers. He had 10 tackles, a key fourth quarter interception and tipped another Ryan Lindley pass that resulted in a turnover in Carolina’s 27-16 wild-card win over the Cardinals.

“He can literally take over the game from the middle linebacker position,” Harper said.

Wagner finished with 104 tackles in 11 games and doesn’t have quite the same big plays on his resume this season as Kuechly, but he’s just as valuable to Seattle’s defense. That’s why he was selected as an All-Pro despite missing five games due to the toe injury.

Seahawks cornerback Richard Sherman said both middle linebackers are “high-IQ football players” who do everything well.

But he said they’re different players.

“Luke is a very dynamic player and I think Bobby plays within the stream of our defense and makes plays in front of him and makes tackles in the backfield,” Sherman said.

Said Rivera: “Seattle has an attacking, aggressive style and I think Wagner fits what they do very well.”

Both are known for their athleticism and speed.

Harper didn’t realize how athletic Kuechly was until he watched him jump flat-footed onto a box five feet off the ground.

Wagner once ran the 40-yard dash in 4.46 seconds. He’s able to flow from one side of the field to the other with swift, seamless movements that even impresses Kuechly.

“When I watched some crossover tape of Seattle, I see him just kept seeing him flying around and making plays,” Kuechly said. “The guy is smart, athletic and he can run.”

The Panthers have yet to figure out Wagner and the Seahawks.

They’ve only scored one offensive touchdown in the past three games against the Seahawks. Rivera knows it will only get tougher on Saturday night with Wagner back in the starting lineup for the rematch.

“He’s a solid football player with a tremendous amount of athletic ability,” Rivera said. “He has a great football mind and because of that he does things the right way.”