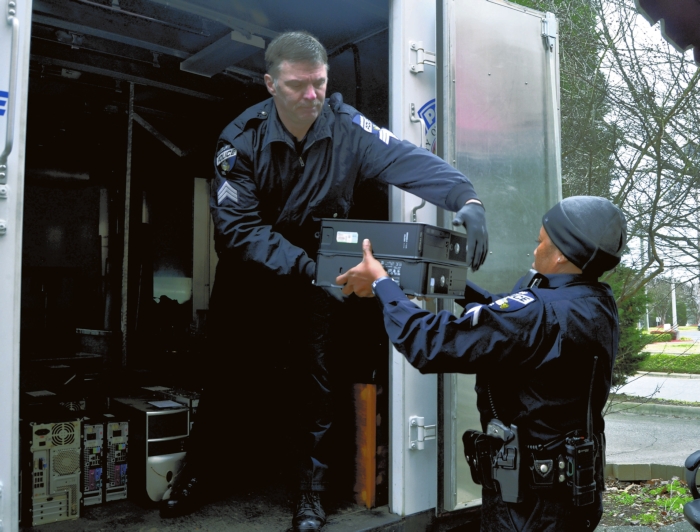 Kelly Yates, owner of Salon & Beyond, initially thought Salisbury Police were conducting a drug raid at the sweepstakes cafe, located just a few doors down from her salon. Yates learned later police were actually closing down the sweepstakes cafe for operating illegally according to state law.

Officers raided a total of three sweepstakes businesses Wednesday morning as Police Chief Rory Collins warned a few months ago that he would.

Collins issued a letter to the businesses informing them they were operating illegally and would face being forced to close.

The letter Collins sent said police would enforce the state law after Jan. 1. An undercover officer was sent in to verify whether the businesses were still operating after Jan. 1 and discovered they were, a police statement said.

Yates said she never had any negative issues arise since the business moved in at the end of the 52 East Center.

She has been in business at that location for nearly eight years and said the worst that she’s seen has been trash in the parking lot. However, she added there’s no way to know if the trash came from customers who were at the sweepstakes cafes. She did note the owner of the strip center hired someone to keep the location clear of trash and other debris.

She always has concerns for her customers who leave her salon and indicated sweepstakes cafes tend to attract negative attention. She’s never encountered any problems since the business was established.

As to whether the places should’ve been raided, Yates said simply “the law is the law.”

Yates said if she were breaking the law, she’d expect police to respond accordingly.

The sweepstakes cafes or internet cafes sell time or cell phone minutes on computers that look like slot and video poker machines. The purchase of the time allows the user “free” sweepstakes entries.

In 2006, North Carolina lawmakers passed a ban on video poker and all other electronic gambling. Sweepstakes games were introduced, which prompted a change in legislation banning them in 2010. Two years later, the Supreme Court upheld the ban.

However, sweepstakes owners have said a new “pre-reveal” software that shows the winners before they play the game, keeps them in compliance with state law.

Some of the businesses close and return in a different form including arcade games while others across the state have filed various lawsuits citing their Constitutional rights were being violated.

Yates said as a business owner she is very concerned about her business and the other businesses around it.

Police officials said after the letter was sent, about 75 percent of the businesses closed, however these three remained.

Police seized 200 computer towers from the three businesses and a sum of money.

There will be pending charges on the owners of the establishments, the statement said.

Other business owners said they’ve had issues with cigarette smoke wafting from the sweepstakes cafes into their businesses, many of whom had to mask the odor. Those business owners declined to comment.

Rowan County sent letters to sweepstakes cafes located throughout the county in May and officials say they’ve since closed.