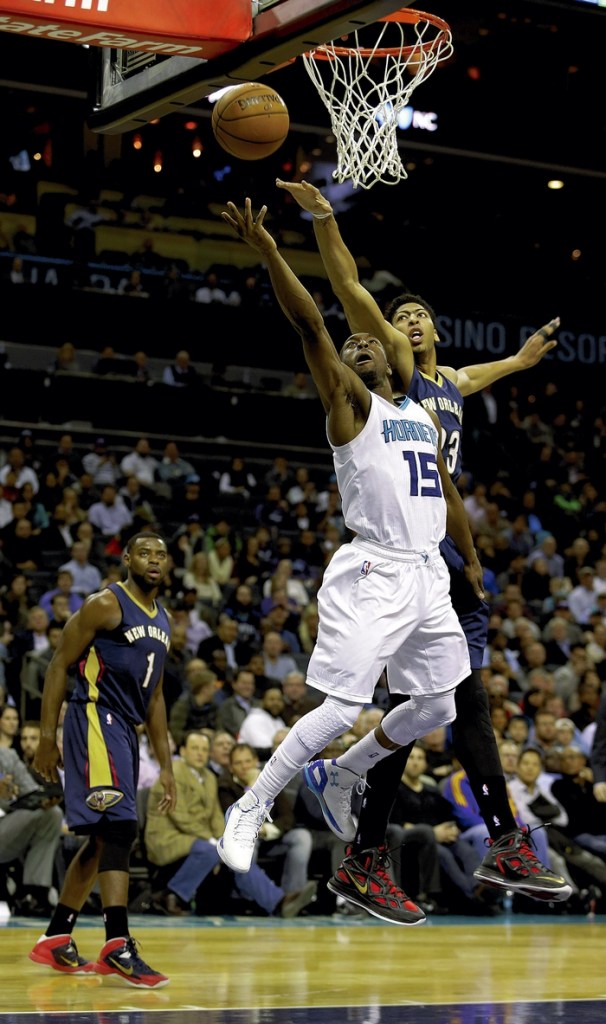 The Associated Press Charlotte guard Kemba Walker, front, gets his shot off despite the defensive efforts of New Orleans forward Anthony Davis, back, during the second half of Wednesday's game in Charlotte. New Orleans Pelicans' Tyreke Evans (1) watches from behind. The Hornets won 98-94.

CHARLOTTE, N.C. (AP) — Kemba Walker knew he was going to take the final shot, no matter what. So did his teammates.

“As soon as we get in those situations, they’re like, ‘Kemba, win the game,'” Walker said. “When you have a bunch of guys that have that much confidence in you, of course you want to take that shot.”

Walker scored 31 points, including an awkward-looking 11-foot jumper from near the right baseline that somehow found its way in off the glass with 1.4 seconds left to lift Charlotte to a 98-94 victory over the New Orleans Pelicans on Wednesday night.

It was Walker’s third game-winner of the season as the Hornets (13-24) overcame a 13-point third-quarter deficit to win their third straight.

With the game tied, Walker drove deep to the right side of the lane close to the baseline, ducked his body and appeared to struggle getting the shot off as Jrue Holiday hit his arm. Walker muscled the ball up as the whistle blew, and it banked in. He added the free throw for the 3-point play.

The Pelicans had one last chance to tie, but Marvin Williams stole the inbounds pass at half court and was fouled. He sank one of two shots to seal the victory.

“I don’t know how that ball went it,” Walker said with a laugh. “It was so awkward because the angle was super awkward. I just got it up and was fortunate it went in. It’s always a great feeling to make shots like that.”

Said Holiday: “He drove the lane and I defended as best I could. He just made the shot.”

The Hornets have counted on Walker to take on an additional scoring load with Al Jefferson and Lance Stephenson out with injuries. He’s stepped up to the challenge with three straight 30-point games.

Without many scoring options on the court, Walker took nearly every shot down the stretch and finished with 17 points in the second half. He missed two layups in the final two minutes, but wouldn’t be deterred from taking the final shot.

He finished 12 of 24 from the field and had four assists and four rebounds.

“The difference now is that he’s shooting the ball better,” Hornets coach Steve Clifford said. “He’s really played at a very high level all year. Earlier in the year, he didn’t shot the ball as well but he spent so much time working on it in the summer that I was confidence he would get it going.”

Gerald Henderson had 16 points for Charlotte and Michael Kidd-Gilchrist added 13 points and 12 rebounds.

Anthony Davis had 32 points, 12 rebounds and four blocks to lead the Pelicans, who fell below .500 for the first time since Dec. 14. Holiday had 16 points and nine assists.

“We battled,” Davis said. “Kemba was just Kemba. He hit some big shots down the stretch and won the game for them.”

The Pelicans built a double-digit lead in the third quarter before Henderson went on a tear, scoring eight of Charlotte’s next 10 points to pull the Hornets within three.

“We fell apart,” Pelicans coach Monty Williams said. “We didn’t share the ball, which is what we have been talking about, especially down the stretch of games.”

The Hornets took the lead with nine minutes left on a pair of free throws by Roberts and would extend their lead to 90-82 when Walker hit two free throws with 4:12 left. But the advantage would quickly evaporate as New Orleans went on a 10-0 run behind Davis.

Pelicans: Davis recorded his sixth double-double in the past seven games. … The Pelicans fell to 6-13 on the road this season.

Hornets: Kidd-Gilchrist has recorded a double-double in three of his last four games for the Hornets.

Walker became the ninth player in Charlotte history to score 30 points in three straight games. Charlotte is 11-3 when Walker eclipses the 30-point plateau.