College basketball: Duke pulls away from Wake at the end 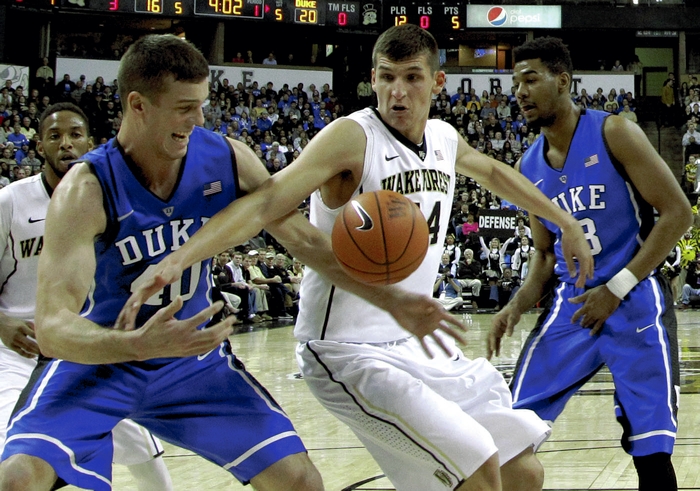 The Associated Press Wake Forest's Konstantinos Mitoglou, center, battles Duke's Marshall Plumlee, left, and Matt Jones, right, for a rebound during the first half of Wednesday's game in Winston-Salem. Wake Forest made a run at the No. 2 Blue Devils in the second half, but Duke left Lawrence Joel Memorial Coliseum with a 73-65 win.

WINSTON-SALEM, N.C. (AP) — Leave it to No. 2 Duke’s lone scholarship senior to lead his freshman-dominated team out of its only second-half deficit of the season.

Quinn Cook scored nine of his 12 points after the Blue Devils fell behind late, helping them beat Wake Forest 73-65 on Wednesday night.

But Cook came through in the final 5 minutes for the Blue Devils (14-0, 2-0), who kept pace with No. 1 Kentucky and No. 3 Virginia as the last unbeaten teams in Division I.

Duke shot 44 percent and pulled away by scoring on eight straight possessions down the stretch to win its closest game all year. The Blue Devils had won each of their first 13 by double figures.

Rasheed Sulaimon added 10 points for the Blue Devils, who dropped four of their previous five ACC road openers and lost in their last visit to Winston-Salem in March.

“There’s a sense of urgency with every ACC game that you can’t manufacture,” coach Mike Krzyzewski said. “You have to experience it.”

They shot nearly 56 percent in the second half and gave a top-five opponent fits for the second straight game before fading.

“We lost. You compete to win. That’s the bottom line,” first-year coach Danny Manning said. “We’ve got to find ways to get the desired result that we want, and that’s a win.”

Miller-McIntyre gave Wake Forest its first lead since the opening minutes when his three-point play with 6:04 remaining made it 56-55. He added a free throw on the next possession to push the lead to two.

Cook countered with a three-point play two possessions later to make it 58-57 and put Duke back on top to stay.

Matt Jones converted a pretty layup, then two possessions later swished what Krzyzewski called “the biggest bucket” — a 3-pointer that stretched the lead to 64-59 with 2 1/2 minutes to play.

Cook added a jumper with 51.9 seconds left before going 4 for 4 from the free throw line in the final 41 seconds — the first two of those pushing Duke’s lead to double figures for the first time, 71-61.

Okafor’s third double-double didn’t come easy. With Thomas leading the parade of Wake Forest’s double teams, Okafor’s first shot didn’t come until he was fouled with 5:47 left in the first half. He finished 4 for 6 — his second-fewest shot attempts of the season.

Wake Forest managed just four offensive rebounds all night — all by Thomas — and had only four second-chance points. … The Demon Deacons’ two 3-pointers were their fewest since they made one in a loss at Arkansas on Nov. 19.

Duke: The Blue Devils, who entered having trailed for 6 minutes, 13 seconds, all season, were behind for 5:06 of this one. They faced their deepest deficit all year after allowing Wake Forest to jump out to a 6-0 lead.

Wake Forest: The Demon Deacons, who lost to No. 5 Louisville three nights earlier, were playing host to top-five teams in consecutive games for the first time in school history.