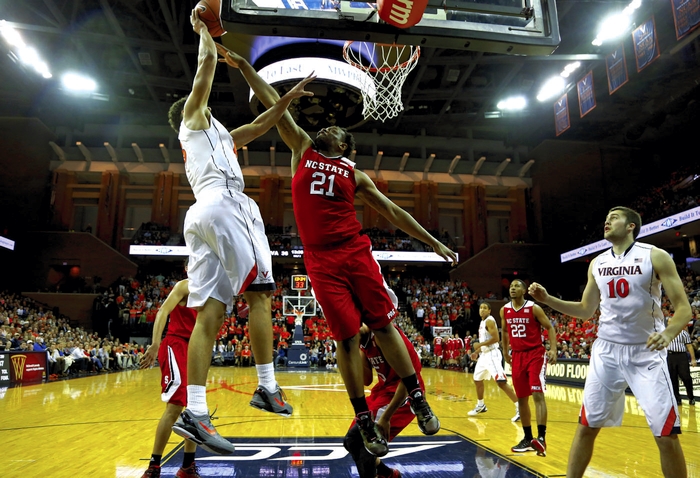 The Associated Press Virginia forward Anthony Gill (13) takes a shot over N.C. State forward Beejay Anya (21) during the second half of Wednesday's game in Charlottesville, Va. The Cavaliers won 61-51.

CHARLOTTESVILLE, Va. (AP) — Virginia coach Tony Bennett won’t say it, and his team still has room to improve, but when the third-ranked Cavaliers are struggling to get their offense clicking, they can almost always rely on their defense to keep them in games.

That was the case Wednesday night in their 19th consecutive home victory, 61-51 against North Carolina State.

“In the second half, we laid it down defensively,” forward Darion Atkins said after Virginia limited the Wolfpack to nine field goals and 20 points by shutting down their hottest shooter, Ralston Turner, and their sizzling 3-point shooting.

The game turned late, after the teams exchanged the lead five times, when Virginia reeled off 10 straight points while holding the Wolfpack scoreless for nearly six minutes. It was the second drought of at least that long for N.C. State in the game.

It left coach Mark Gottfried thinking about how close his team could have been to winning.

“We had some breakdowns that just really hurt us,” he said of the drought, which started with his team ahead 42-41 and 8:59 to go. “We had some offensive fouls called, we had couple where we didn’t block out and they had a couple putbacks, two or three in a row. … There’s a lot of good things that we did. We just didn’t do enough and didn’t finish the game.”

Virginia (14-0, 2-0 Atlantic Coast Conference), meanwhile, got 16 points from Justin Anderson, 14 from Malcolm Brogdon, 12 from Anthony Gill and 11 from Mike Tobey in keeping its best start since the Ralph Sampson era going strong.

Tobey, especially, was a difference-maker, grabbing three offensive rebounds after halftime and scoring eight points. At times guilty of lacking the aggression that could make him a dominant player inside, he found that strength after halftime.

“I think a lot of it is just getting into a mindset and just remembering how successful you can be,” the 7-footer said.

Ralston Turner led N.C. State (11-5, 2-1) with 14 points and Kyle Washington had 13, but Turner didn’t score in the second half after making all four of his 3-point shots before intermission. Brogdon and Anderson drew that assignment.

Both teams were cold-shooting early in the second half and the lead changed hands five times, beginning with a 6-0 run that gave the Wolfpack a 37-36 edge. The lead had already been swapped three times when Andersons’ 3-pointer ended the Cavaliers’ 2 for 13 shooting start and gave them a 41-39 lead. Lacey countered for N.C. State by flinging the ball toward the basket with the shot clock winding down. It somehow found the bottom of the net, putting the Wolfpack back ahead at 42-41.

Then the Cavaliers settled down, started making shots and scored the next 10 points, opening a 51-42 lead while clamping down at the other end. N.C. State went scoreless for 5:58 before Caleb Martin’s 3-pointer with 3:02 left.

N.C. State had a similar dry spell in the first half.

The Wolfpack made four 3-pointers in the first 5 1/2 minutes and opened a 16-8 lead on an 18-footer by Ralston Turner with 13:47 to play. But Virginia’s defense tightened, and N.C. State didn’t make another field goal for more than 6 minutes as the Cavaliers put together a 21-4 run to take a 29-20 lead.

N.C. State: The Wolfpack is beginning a stretch of three consecutive games against ranked teams. It plays host to No. 2 Duke on Sunday and No. 18 North Carolina next Wednesday night. … The Wolfpack was 2 for 9 from the free-throw line.

Virginia: Despite allowing 72 and 80 points in their last two games, the Cavaliers are second nationally in scoring defense, allowing 50.8 points. … Virginia had 15 second-chance points to N.C. State’s 2.

College basketball: Duke pulls away from Wake at the…