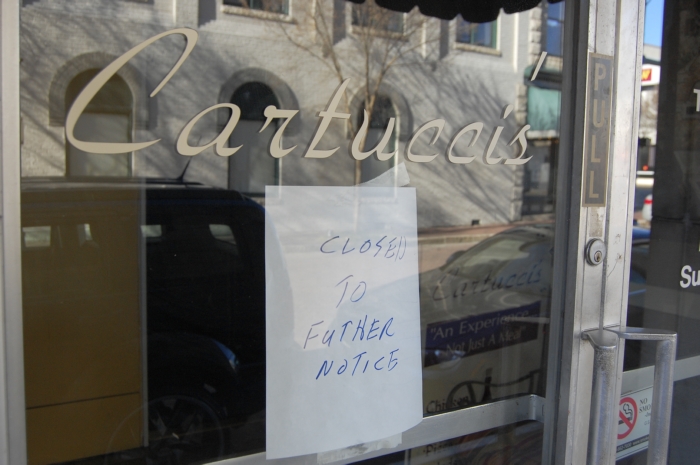 This sign was on the door of Cartucci's Italian Restaurant Thursday morning.

A sign taped to the entrance of the restaurant Thursday morning said it was closed until further notice.

The restaurant is on East Fisher Street and is owned by Ted Aurora. Calls to the restaurant were not answered.

The restaurant’s Facebook page doesn’t have any posts about why it’s closed.

The Grapevine, a wine bar just around the corner on South Main Street, is also owned by Aurora, and is still open, according to Downtown Salisbury Inc. Executive Director Paula Bohland.

But Bohland said Thursday afternoon she’d been unable to get in touch with anyone from Cartucci’s to find out why the restaurant is closed.

She said she’s previously been told a decision whether to keep The Grapevine open will be made later in the month.

A fire in July 2013 caused the restaurant to be closed until last summer. Bohland said she had the sense the business was struggling to gain traction after reopening.