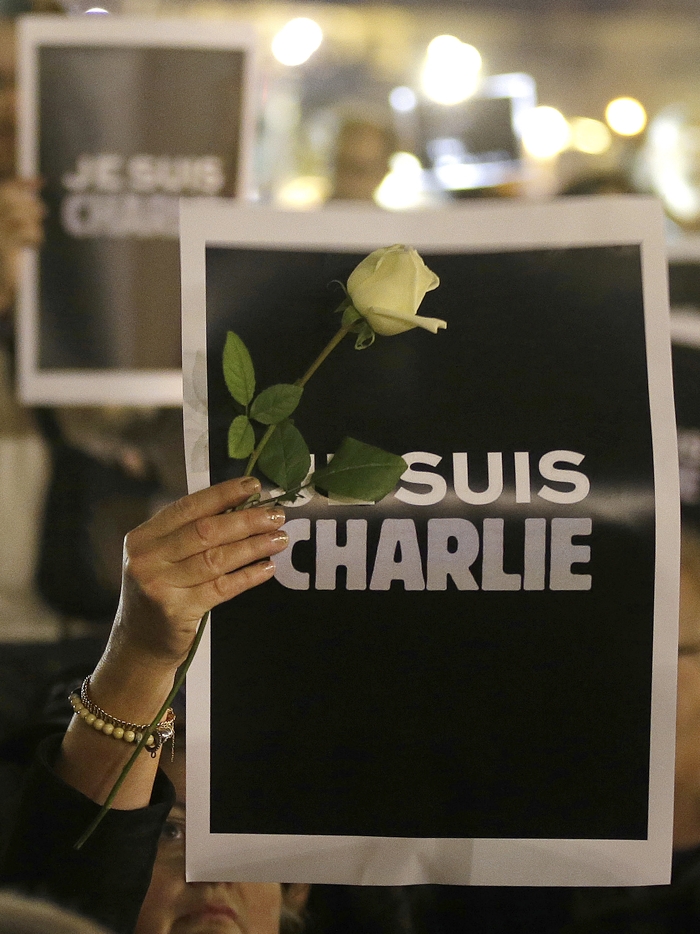 A woman holds a poster reading 'I am Charlie' with a rose, at a gathering in Nice, southeastern France, to express solidarity with those killed in an attack at the Paris offices of weekly newspaper Charlie Hebdo, Wednesday, Jan. 7, 2015. Three masked gunmen shouting ìAllahu akbar!î stormed the Paris offices of a satirical newspaper Wednesday, killing 12 people, including its editor, before escaping in a car. It was France's deadliest postwar terrorist attack. (AP Photo/Lionel Cironneau)

1. HUNT FOR 2 IN PARIS SHOOTING; 1 SURRENDERS

Police search for two heavily armed men, one with a history in jihadi networks, in the killing of 12 people at a French satirical newspaper.

Thousands take to the streets around the world to protest the attack at Charlie Hebdo, while the slogan “Je Suis Charlie” trends heavily on social media.

McConnell and Obama dig in for showdowns over health care, a big oil pipeline, immigration policy and financing an anti-terrorism agency.

5. WHAT TABOO TOPIC HAS PAKISTANIS TUNING IN

In the religiously conservative country, a TV call-in advice show is tackling an issue rarely discussed in public: Sex.

Rows of flowers, teddy bears and posters that once lined a parking lot where six were killed find a temporary home in a Tucson, Arizona, museum.

7. WHAT TO LOOK FOR AS FEDS WRITE NEW DIETARY ADVICE

Eat fewer calories, more fruits and vegetables, and new guidance about sugar, salt, meat and caffeine could be part of the government’s dietary guidelines for healthy eating.

More consumer drones are expected to be unveiled at CES than ever before, as federal regulations concerning usage continue to be worked out.

9. WHO HAD A ‘WONDERFUL TIME’ PERFORMING

Bill Cosby got a standing ovation from polite Canadian fans at his first show following a string of cancellations in the wake of sexual assault allegations from more than 15 women.

The 2013 Heisman Trophy winning quarterback says he’ll give up his final two years of college eligibility and enter the NFL draft.