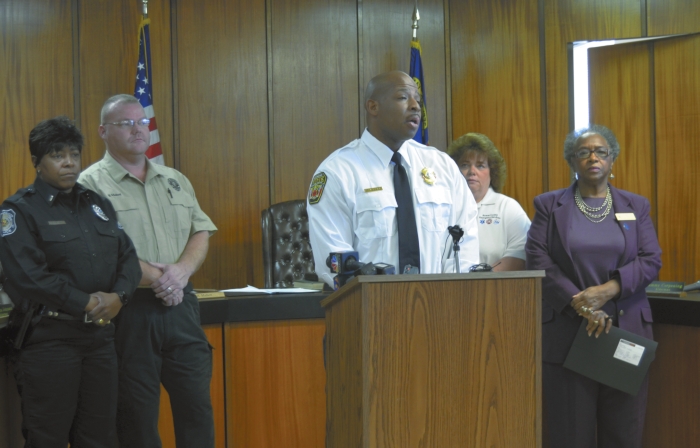 EAST SPENCER – Investigators say someone started the fire that destroyed the Dunbar Center last week, but they don’t know why.

A fire destroyed the former school on Dec. 30, and fire personnel have continued to put out hot spots inside the 56-year-old building. The building was rebuilt in 1958 and operated as Dunbar High School. The original school burned in 1938.

Rowan County Fire Investigator Deborah Horne said during a press conference Tuesday morning that investigators know the fire started on the north side of the building, and it was started by someone inside the building.

“At this point in the investigation, the intent of the fire cannot be proven. There is no way to determine if the fire was started intentionally to devastate the building or if someone started a fire to keep warm and it escalated beyond their control,” Horne said.

A law enforcement investigation is ongoing.

The East Spencer Fire Department, the Bureau of Alcohol, Tobacco, Firearms and Explosives (ATF), and the Davidson County Fire Marshal’s Office responded. The SBI was at the scene for much of day after the fire. Eighteen fire agencies responded with about 75 firefighters, said East Spencer Fire Chief Shawn McBride.

He said flames were visible from the building when East Spencer firefighters arrived, and fire personnel began attacking the fire from a defensive standpoint. Their main objective was to stop the fire from moving into the gym, which is on the right of the structure and furtherest away from Long Street.

Firefighters used 250,000 gallons of water to extinguish the fire.

McBride addressed the issue of water pressure and supply to the town, which the town board discussed at its Monday meeting. Public Works Director F.E. Isenhour told the board that water pressure would have been better if the town had a bigger water line, but it would not have saved the structure.

McBride echoed Isenhour’s sentiments during the Tuesday press conference, saying water pressure was an issue that night and initially firefighters didn’t have a sufficient amount water to fight the fire. He said once fire personnel realized they needed more water, they used the tanker task force to access water from area fire hydrants.

Fire crews had to shuttle water from two hydrants — one near Bojangles’ in Spencer and one on South Long Street.

“The Dunbar Center is a historical building within East Spencer, and they were thankful they were able to keep the fire from spreading any further,” McBride said.

The property is owned by Shady Grove Baptist Church. It is not clear at this time what plans the church has for the building, but Mayor Barbara Mallett said she’s interested in working to come up with ideas.

She added that a small committee had met before the fire to see if the building could be used. Several ideas came up, including a charter school or a family resource center, Mallett said.

The building had been a target for vagrants, and people have stolen metal from the building in the past, McBride said.

Mallett and McBride thanked those who helped to battle the blaze.