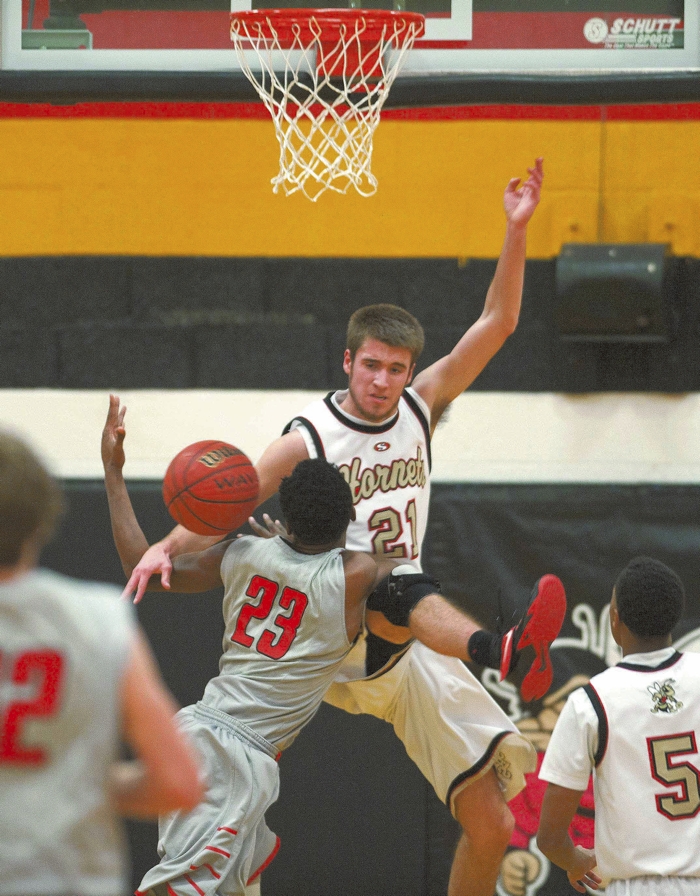 “Sure, it’s non-conference, but we didn’t do well in the Christmas tournament (1-2), and if we’d lost this one we would’ve gone into our first conference game Friday with three losses in four games,” Causby said. “Winning this one gives us a little momentum.”

Wes Fazia and Deshawn Troutman scored 15 each for the Hornets. D.J. Alexander finished strong for 12 points.

“We needed to win this one,” said Fazia, a 6-foot-7 junior. “Losing to South in the Christmas tournament left a bad taste.”

Tyler Rary hit four 3-pointers and matched his career high of 17 to lead the Raiders. Lavon Hill played with illness but scored 13.

“I wasn’t making anything in warmups, ” Rary said. “But then the game got going, and I started feeling it. We played a good team game and distributed the ball well.”

Causby said South Rowan (3-10) is always a difficult matchup for the Hornets, and the Raiders proved to be again. South Rowan’s big guns Hill and Qwan Rhyne had only five points between them in the first half, but South Rowan was down only six at the break because of six 3-pointers — three by Rary, two by Colson Childers and one by Tre Littlejohn.

Salisbury sophomore Tre Oats scored the last six points of the first half to give the Hornets a small cushion, but then South Rowan dominated the third quarter as Hill got going and the Hornets went cold.

“This is non-conference, and it’s really not gonna matter a whole lot,” South Rowan coach Bryan Withers said. “We had some sick kids, but we still played very hard. We had our chances.”

Alexander powered for a layup to tie it, and two free throws by Troutman and a bucket by Fazia put the Hornets (10-4) ahead. M.J. Rayner did a good job defensively against Rhyne down the stretch, and Salisbury did a better job of defending the 3-point line in the fourth quarter.

“I didn’t think either team was really engaged until the third quarter, and then South had a really good surge,” Causby said. “Then we had just enough push in the fourth quarter to get the lead back. It was a tough game.

“I don’t care who you play or where you play that first game after the Christmas break, it’s not going to be an easy game.”

Salisbury struggled mightily at the foul line most of the game, but at crunch time, Alexander, Alex Yang and Fazia knocked down free throws. Yang came off the bench and hit two big ones with the Hornets clinging to a three-point lead with 35 seconds left.

“We take those free throws seriously,” Fazia said. “We needed to make them and we did.”