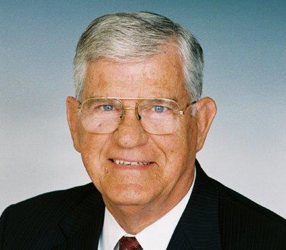 Martin was born in Savannah, Ga., Martin graduated from Davidson College and earned his Ph.D. in chemistry from Princeton University. He returned to his alma mater and served on the faculty of Davidson College until he was elected to the U.S. House of Representatives, where he served six terms as congressman from the 9th District of North Carolina.

In 1985, Martin was elected governor of the state, later re-elected, and he remained in that office until 1993, when he returned to the private sector. He has served on numerous government and corporate boards and is currently chairman of the N.C. Global TransPark Foundation, as well as chairman of the UNC Nutrition Institute Advisory Committee. He holds four patents in the chemistry of butyl rubber vulcanization and is a recipient of the American Chemical Society’s Charles Lathrop Parsons Award for outstanding public service by an American chemist. Martin is also a musician, a composer, a sailor and an avid golfer.

“Four hundred years ago,” he reminds us, “the theological academies and hierarchies were rocked by Galileo’s findings that Venus orbited the Sun, Jupiter had four moons, and the Moon’s visage was pock-marked. Peaceful accommodation slowly settled in, only to be wracked again 250 years later by Darwin’s explanation of “The Origin of Species.”  When atheists seized upon Darwin’s evolution theory as a rejection of God, many Christians countered by rejecting evolution.”

These and related historic episodes are recounted in Martin’s as yet unpublished book, “Revelation through Science.” He then notes that in recent decades, a group of theistic astronomers, physicists, paleontologists and physicians have claimed that many fundamental concepts of science point to a Creator that transcends and predates nature. Martin builds a case for evidence of this “anthropic principle” in geology and paleontology, biology, chemistry and biochemistry. Much of that argument is anticipated by similar accounts from other authors, but Martin is the first to discuss examples from his own field of organic chemistry. Among other things, he points out that there are a number of extremely complex naturally occurring substances that defy laboratory synthesis. “There is zero probability,” he asserts, “that this could happen by chance, even in 4.5 billion years.”

Admission to the forum is free.