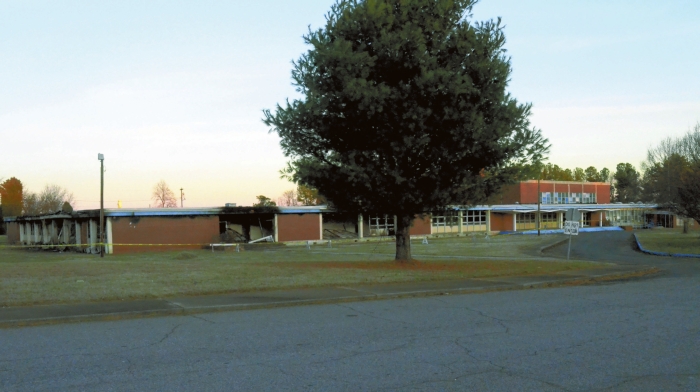 Multiple fire departments responded to a fire that destroyed the Dunbar Center last week. An official cause has not been released, but fire officials will hold a press conference Tuesday morning to provide further details about the fire. Shavonne Walker/Salisbury Post

EAST SPENCER — It’s only been seven days since the historic Dunbar Center was destroyed by fire, but the 56-year-old building is still on the hearts of the East Spencer town board. Board members and town staff spoke about the building and fire response during Monday’s town meeting.

The fire began just before 8 p.m. Dec. 30 and has continued to smolder, East Spencer Fire Chief Shawn McBride said during the meeting.

McBride said firefighters have had to return to the site every night since the fire began. The East Spencer Fire Department spent 23 hours at the scene, he said.

He gave a special thanks to all of the departments, fire investigators and other officials who helped respond to the fire.

McBride said there was fire blowing out of both sides of the building. He also confirmed that the majority of the damage is on the left side. He said the gym and kitchen, which are located on the right, are the only parts that are “salvageable.”

Alderwoman Tammy Corpening asked if a cause had been determined, but McBride would not say what caused the massive fire. He did inform the board of a press conference scheduled for this morning at town hall.

Alderman John Noble asked F.E. Isenhour, head of public works and planning, about the water pressure during the fire.

Isenhour said water was restricted to the 8-inch line running through the town and that pressure would’ve been somewhat better if the town had a 12-inch line.

However, Isenhour said even a 12-inch water line wouldn’t have helped “save” the structure with a fire that size. The town has been actively looking at its water system to determine leaks and other water loss issues or some time now.

Thanks and appreciation was also given to Mayor Barbara Mallett, the American Red Cross and Southern City AME Zion Church for providing food, hot drinks and a warm place. The church is located across from the Dunbar Center.

Also at the meeting, the board:

• Will continue the necessary steps toward acquiring a Parks and Recreation Trust Fund (PARTF) grant to redevelop Royal Giants Park. The board identified two years ago that the park needed to be placed high on its list of priorities. Since that time a few projects including a new picnic shelter have been added at the park.

• Kids for King — Biking for a Change event will take place from noon to 2 p.m., Jan. 19 beginning at the Dunbar Center to town hall, 105 S. Long St. Children of all ages are invited to participate in a community bicycle ride. The East Spencer Police Department provided five bikes that will be given away through a raffle.

• Police Officer Sharon Hovis will become a full-time lieutenant and second in command at the East Spencer Police Department beginning Jan. 18. Hovis has been with the department for nearly a year. She was previously with the Rowan County Sheriff’s Office.

Salisbury man will spend life in prison for the…