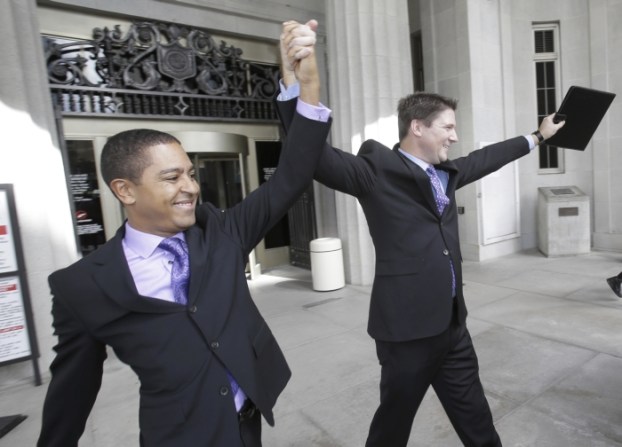 Todd, left, and Jeff Delmay, celebrate as they leave the courthouse after having attended a hearing in which a Miami-Dade Circuit Judge cleared the way for a gay and lesbian couples to marry, Monday, Jan. 5, 2015, in Miami. Judge Sarah Zabel provided a jump-start Monday to Florida's entry as the 36th state where gays and lesbians can legally marry, saying she saw no reason why same-sex couples couldn't immediately get their licenses in Miami-Dade County ahead of a midnight launch statewide. (AP Photo/Wilfredo Lee)

1. GOP-LED CONGRESS POISED TO TAKE OVER

Republicans plan to move swiftly toward a veto showdown with Obama over the Keystone XL pipeline.

The Sunshine State’s ban on same-sex marriage is over, and court clerks in some counties waste no time issuing marriage licenses to same-sex couples.

The launch of the unmanned Falcon rocket to the International Space Station is called off, and an unprecedented rocket landing is put on hold.

The U.S. is looking to its southern neighbor for help implementing changing policies on immigration and Cuba.

Commanders are at odds with lawyers over the extent to which soldiers should be held legally accountable for their actions during last summer’s Gaza war.

6. WHAT IS NATO’S MOST PRESSING PRIORITY

Getting the swift and nimble expeditionary force into operation that’s supposed to act as a deterrent to Russia is paramount for the 28-member alliance.

7. WHO IS EXPECTED TO ATTEND CUOMO FUNERAL

The standard bearers of the Democratic Party are joining family and friends for a final goodbye to one of their champions, the former three-term New York governor.

Strong currents force Indonesia to expand the search area for the missing AirAsia jet, as efforts to reach the wreckage and black boxes beneath the sea become desperate.

AP’s Anick Jesdanun tells us how TV makers and service providers are keeping big screens relevant in this new era of online video.

Randy Johnson, Pedro Martinez and John Smoltz appear to be shoo-ins for enshrinement in Cooperstown.