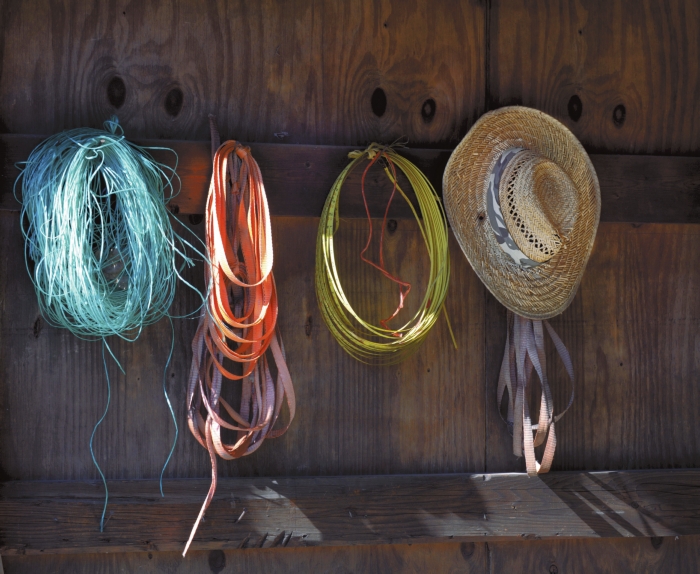 At the Pinetop Farm on Majolica Rd, owner Bryce Kepley keeps his colored twine hanging orderly in his shed next to a straw hat.. photo by Wayne Hinshaw, for the Salisbury Post

Most newspapers and other media have been running stories of the “best of” last year or “what it looks for or expects” in the coming year.

I thought that would be a great time for me to look back at a few of my photos that I really liked, but they didn’t make the newspaper for various reasons.

In the movie and music business, these culled portions are called outtakes.  They are usually removed from the larger body of work during the editing process. Often the outtakes from TV shows that contain humorous mistakes end up being shown later and called bloopers. Someone laughed when they were supposed to be serious, or they misspoke their lines.

In music there is usually some mistake with the sound or voices. Sometimes the producers just don’t like the song after they hear it recorded.

With my newspaper photos, I always shoot far too many photos that cannot be used due to lack of space. Or they are photos that I see and like, but they don’t illustrate the story as well as others. Editors don’t always like the same photos that I think are my best, so they get dropped for another version.

When I am out on a story or assignment, I often see and photograph scenes that have nothing at all to do with the purpose I was assigned. Often, I just don’t submit them to the editors, since I know they will not be used with the story.

What I have gathered  for this column are a few photos that I like that didn’t match the story or were submitted and were not used. Maybe I will get them past the editors this time around.

While at the Dewey Dash Color Run, the runners were hit with colored corn starch as they raced past.  I don’t know the reason for doing such a thing, but it was colorful. I photographed a young man running as he was hit with blue and yellow color under his chin, and I liked the pattern.

At the Pinetop Tree Farm while folks were selecting their Christmas trees, I noticed brightly colored twine and a straw hat hanging in a shed with the sunlight skimming over them. It is a simple photo with good texture, nice lighting and pleasant colors. I figure the straw hat was used in hot weather when working on the farm before the weather required straw hats be replaced with toboggans.

In the Cleveland Christmas Parade, little Jalen Britton, wearing a white suit and red shirt, gave me a thumbs up as he passed in a car. With his thumbs up, big smile and the golden crown as “Mr. Emmanel” from Emmanuel Pentecostal Church, the photo needed another look.

During the Sam Moir Christmas Classic basketball tournament, I covered two West Rowan girls games. In one of the games, West Coach Ashley Poole showed telling emotion when her girls missed several shots under the basket, one after the other. I could see the pain on her face as the ball rolled off the rim again and again.

The other photo that might have a second life was taken at the Gold Hill Village Lighting of the Fall Fires event. The old File General Store was open with the lights inside calling for visitors. On the porch was a supply of firewood, parts of a bed, and a rocking chairs being washed with warm pretty light from inside the store.