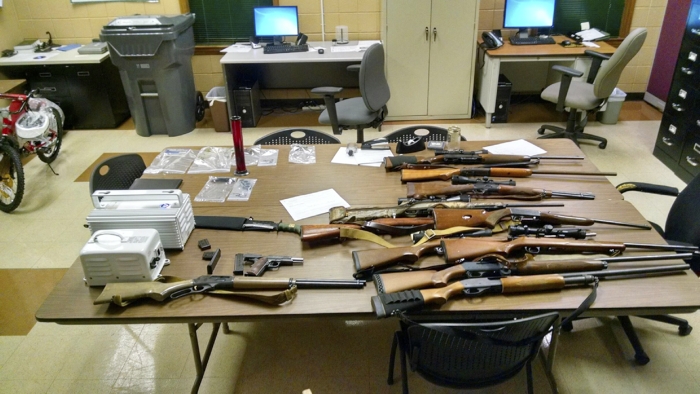 Police seized these guns and other items from a Larchmont Place apartment where a marijuana growing operation was taking place.

Two men have been charged with growing marijuana inside their condominium at Wiltshire Village off Larchmont Place.

After receiving a complaint, authorities went to the condo Saturday and found Charles Wilson there. Wilson refused to give the officers consent to search the apartment.

The officers waited outside with Wilson while they obtained a search warrant. Once police went inside, they found a marijuana growing operation in an upstairs bedroom.

Also inside the room was a rolling trash can with tubing coming from it, she said, and an exhaust fan installed in the ceiling.

The apartment also had marijuana pipes, bongs, scales and knives, as well as 12 firearms including shotguns, rifles and pistols, police said.

He was issued a $5,000 secured bond and has since been released from the Rowan County Detention Center.

While police were there, another man who lives at the condo, Jacob Delaney Woodby, drove up to the complex.

He also received an automatic 30-day license revocation. Woodby had a pocket knife in his pants pocket. He was issued a $5,000 secured bond and has since been released from the county jail.

Wilson has previously been convicted of misdemeanor stalking, resisting arrest and disorderly conduct.