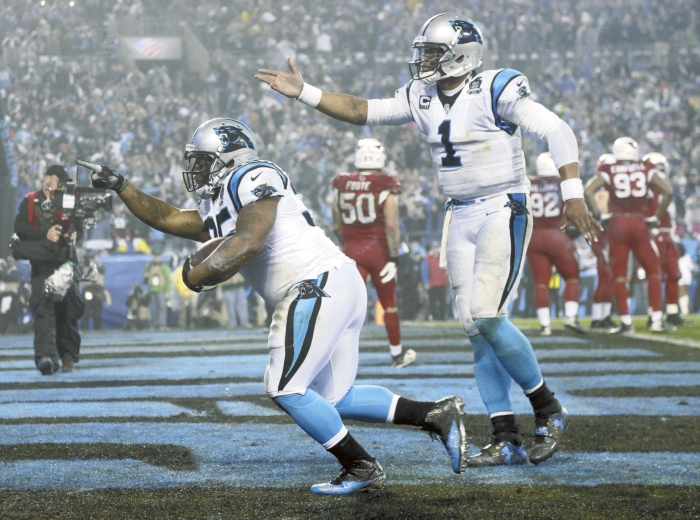 CHARLOTTE (AP) — Cam Newton said if the Panthers hope to make a deep playoff run they’ll need to cut down on mistakes and make more plays on offense.

Carolina turned over the ball three times on Saturday against Arizona but managed to escape with a 27-16 win thanks to a defense that limited quarterback Ryan Lindley and the Cardinals to 78 yards, the fewest allowed in NFL postseason history.

“Those things can’t happen, especially in playoff football. We can’t expect to win when we have three turnovers,” Newton said after his first career playoff win.

The Panthers will play top-seeded Seattle on Saturday night in the NFC divisional playoffs. Carolina has lost to Seattle in each of the last three seasons by a total of 13 points, including a 13-9 defeat on Oct. 26 in Charlotte.

Newton praised his defense’s effort after the game, but didn’t appear too thrilled with the overall performance of the team.

The Panthers jumped to a 10-0 lead, but a muff by returner Brenton Bersin and an interception by Newton — a play in which wide receiver Jerricho Cotchery ran the wrong route — led to two Arizona touchdowns, giving the Cardinals a 14-13 lead at halftime.

Carolina players said it was frustrating to be down by one in the locker room knowing they had outgained Arizona 208-65.

“We started out fast on both sides of the ball and on special teams, but it kind of fizzled in the (middle of the game),” Newton said. “That fizzle can’t happen if we expect to do great things.”

Newton also had a fumble early in the fourth quarter with the Panthers up 27-14, giving the Cardinals the ball at the Carolina 8 with a chance to get back in the game. But All-Pro linebacker Luke Kuechly bailed him out by intercepting Lindley near the goal line on the next play.

“We have to play better than we have,” Panthers coach Ron Rivera said. “We gave them an opportunity to stay in the game. … We just have to be smarter than some of the things we did out there. We have to protect the football. It’s a very valuable thing.”

“I know J.J. Watt is a great player, he’s phenomenal, but you can’t find a guy who impacts the game on defense like Luke,” Olsen said after the game. “The run game, the pass game, covering running backs. … I mean the guy is unbelievable. Luke is the best defensive player I have ever played with. (Brian) Urlacher was like that … a similar, dynamic kind of player, but Luke is that good already. He’s phenomenal.”

Newton finished the wild-card game 18 of 32 for 198 yards with two touchdown passes and two turnovers. He also ran seven times for 35 yards, picking up back-to-back first downs on third-and-long in the third quarter.

Newton and the offense could have more challenges moving forward.

Carolina could be without speedy wide receiver Philly Brown, who injured his left shoulder in the first half against Arizona and did not return. Brown was a late-season addition to the starting lineup and provided the Panthers with some much-needed speed and a legitimate deep threat.

The Panthers have not announced the extent of the injury.

Although the Panthers’ defense entered the record books, Kuechly stopped short of saying it was the best defensive effort he’s been a part of in Carolina. He wasn’t thrilled the Panthers gave up two touchdowns on quick change of possessions in the first half.

“I saw 14 points on the scoreboard at halftime and I said, ‘Dang, we need to play a little better. We can’t let up any more points at this point,’” Kuechly said.

The Panthers were 3-8-1 at one point in the season, but managed to fight back and win the NFC South to land a home playoff game. Despite their record, Newton said the Panthers aren’t satisfied after their first postseason win in nine years.

“We have a long way to go,” Newton said. “And we’re anticipating traveling and getting another big win next week.”