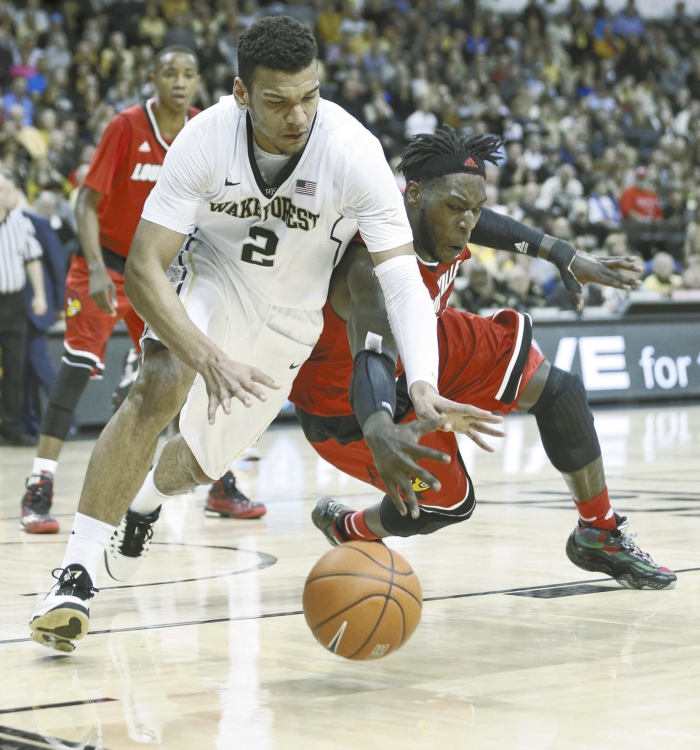 Jones scored 20 of his 22 points in the second half and the Cardinals won in their ACC debut, pulling away to beat Wake Forest 85-76 on Sunday night.

Jones — who entered with only six more assists than turnovers for the season — added a career-high 10 assists and had only two turnovers.

“All Chris Jones has to do to be one of the better point guards in the country is listen,” coach Rick Pitino said. “He’s gone from never listening in junior college and high school to listening about 70 percent of the time. All he’s got to do is get it to 100 and we’ve got ourselves a special player.”

Jones quibbled only with his Hall of Fame coach’s math.

Jones put Louisville ahead to stay two possessions later with a contested jumper that started decisive run. He was 6 for 6 from the free-throw line in the final 5 minutes for Louisville, which scored on nine of its last 10 possessions.

Codi Miller-McIntyre and freshman Mitchell Wilbekin had 14 points apiece for Wake Forest, which had its three-game winning streak snapped but won’t have to wait long for another shot at a top-five team: No. 2 Duke visits later this week.

“We could play with anybody with that effort,” Thomas said. “We’ve just got to be better with details, the scouting report, and we’ve got to learn how to finish games.”

Terry Rozier added 18 points for the Cardinals, who are playing in their eighth basketball conference and their third in three years, with their one-season stint in the American Athletic Conference in 2013-14 coming after the Big East broke up.

This was their eighth straight win in a conference road opener — no matter the league.

The ACC might be foreign territory to these Cardinals, but one of their best players felt right home. Harrell is a native of Tarboro who had his own section of fans holding up welcome-home signs at Joel Coliseum. He had 20 points in the first half and was 2 of 3 from 3-point range — after making just 1 of 17 attempts from long range during his previous 11 games.

Wake Forest shot 52.8 percent and became the only team this season to shoot better than 50 percent against Louisville. The biggest reason for that was Thomas, who was 11 of 14. His teammates combined to shoot 43.6 percent.

Louisville: Shaqquan Aaron finished with 11 points. … Pitino improved to 3-0 during his career against Wake Forest. His other two wins came in the NCAA tournament when he was at Kentucky.

Wake Forest: The Demon Deacons fell to 0-2 this season against the Pitino family. Minnesota — coached by Rick’s son, Pitino — beat Wake Forest 84-69 on Dec. 2 in the ACC-Big Ten Challenge.