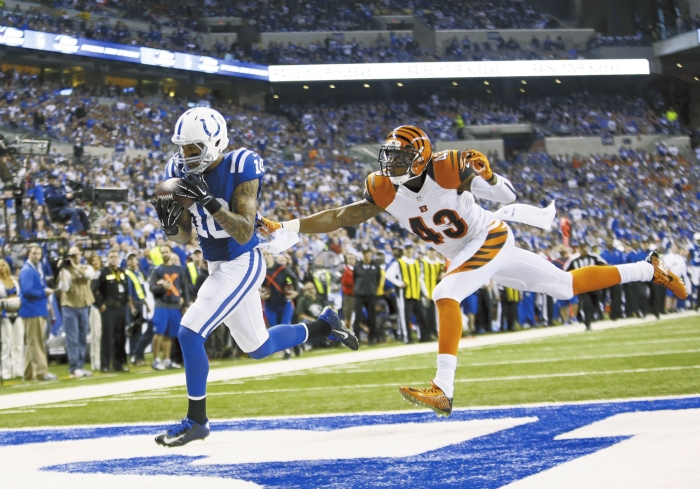 INDIANAPOLIS (AP) — When Andrew Luck was under pressure Sunday, he stood tall and maintained his poise.

Luck delivered a game-changing touchdown pass as he was headed to the turf, and Indianapolis’ defense dominated the rest of the game as the Colts roared past Cincinnati 26-10 and into the divisional playoff round.

“The one magical play was when Andrew was at his finest,” said coach Chuck Pagano, whose team heads to Denver next Sunday. “He’s a maestro. He’s unbelievable back there.”

They haven’t won a playoff game since January 1991.

“It’s kind of like missing a field goal that you should have hit,” Cincinnati kicker Mike Nugent said after setting a franchise record late in the first half with a 57-yard field goal that got the Bengals within 13-10.

But the glaring difference between the postseason success for Luck and the Colts (12-5), and the postseason failures for Dalton and the Bengals was never more apparent than on two big plays in the third quarter.

On second-and-10 from the Bengals 36, Luck floated a perfect pass to the corner of the end zone as Carlos Dunlap started to take him to the turf. Rookie receiver Donte Moncrief sprinted across the field and cradled the ball for the score that gave Indy a 20-10 lead.

“I sort of stepped up in a crease there, saw Donte running his butt off and tried to put it in a spot where only he could get it,” Luck said. “He does such a great job of running underneath those balls and we had the touch.”

On the next Bengals plays, Dalton had Brandon Tate open deep down the middle on a flea-flicker. But instead of scoring, Colts cornerback Greg Toler raced over and broke up the underthrown pass. Three plays later, the Bengals punted. They never seriously challenged again.

Dalton, whose two top receivers were inactive, finished 18 of 35 with 155 yards and lost a fumble on a day the Bengals managed only 98 total yards and five first downs in the second half.

The Colts were much more proficient.

Luck went 31 of 44 for 376 yards, and he couldn’t be going into the next game under better circumstances. For the first time in four tries, Luck finished a playoff game without a turnover. He also joined Dan Fouts, Jim Kelly, Warren Moon and Drew Brees as the only NFL players with three straight 300-yard games in the postseason.

Luck managed to keep his feet and his poise on the biggest play of the game, and finished without an interception for the first time in a playoff match.

T.Y. Hilton caught six passes for 103 yards, Daniel “Boom” Herron had 10 catches for 85 yards — he also rushed for 56 and a touchdown— and Adam Vinatieri made four field goals.

No, it wasn’t the clean game Pagano wanted — Hilton dropped a couple of potentially game-changing passes; Herron lost a fumble; and the Colts were called for nine penalties. But they still led 13-10 at the half, and Pagano liked the way Luck took a page out of Aaron Rodgers’ playbook in the second half.

“We were a little unsettled, a little anxious, in the first half,” Pagano said. “We just said, ‘Hey! Just calm down, relax.”

Notes: The Bengals deactivated A.J. Green (concussion) and Jermaine Gresham (back), then lost linebacker Rey Maualuga (hamstring) in the first half. … Vinatieri made a field goal in his 12th consecutive playoff game, matching his own previous mark for the second-longest streak in NFL history. Toni Fritsch did it in 13 straight games from 1972-79. … The Colts had a moment of silence for ESPN sports anchor Stuart Scott, who died Sunday.