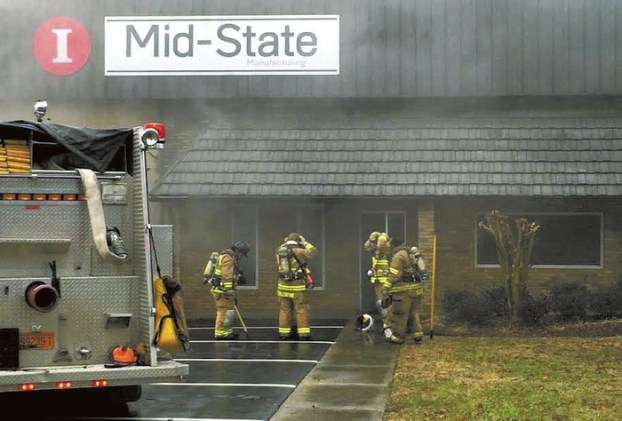 Fire and rescue crews from Rowan and Iredell counties have responded to a fire at Midstate Machine in Mount Ulla. Jeanie Groh/Salisbury Post

Cause of Mount Ulla Fire unknown

The cause of a three-alarm fire at a Mount Ulla metal manufacturing shop Sunday afternoon is still unknown, according to Rowan county Fire Marshal Deborah Horne.

Fire crews were called out to Midstate Machine, located at 2900 Corriher Grange Rd. in Mount Ulla at 1:20 p.m.

One fire fighter transported to the hospital for smoke related injuries as crews from Rowan, Iredell and Cabarrus counties tried to contain the fire to the main building. The injuries were non-life threatening.

Horne said the biggest challenge was getting to the fire, which was located in the backside of the building, making it difficult to get to the fire and to set up water points.

“The weather has caused a lot of problems,” she added. Low clouds kept the smoke from dissipating, creating poor visibility.

Mooresville Road had to be closed down at one point because of the smoke.

None of the employees were in the building at the time of the fire.

Salisbury City Council will hold its first meeting of 2015 Tuesday. The major item on the agenda is a public... read more