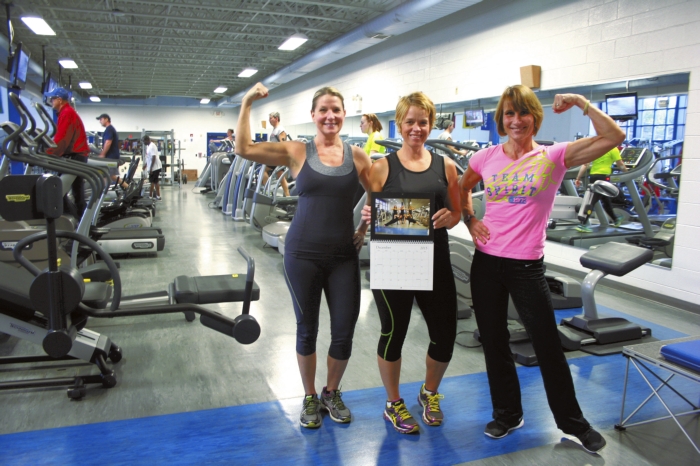 Marti Moore, Tammy Swicegood and Ester Marsh pose in the Hurley Y's fitness center with a copy of the Y Angels calendar. Susan Shinn, for the Salisbury Post.

The Hurley Y trainers want to keep you on track with your 2015 fitness goals. To do so — and have a little fun, too — they’ve created the 2015 Y Angels calendar.

Marsh, the Y’s fitness director, notes that the Hurley Y begins its 12th year of operation in 2015.

“We are a very high-use facility,” she says, “which we like. There’s lots of energy, but there’s lots of wear and tear on the equipment.”

Marsh’s office looks out into the fitness center, a busy place even at midday.

The idea from the calendar came from a photo taken of Marsh, Swicegood and Moore when Larry Kinder retired in 2014. They posed a la Charlie’s Angels — but went by the moniker “Larry’s Angels” instead.

When members saw the photograph they said, “Why don’t you do a calendar?”

Marsh thought it was a good idea.

“We wanted to make sure it wasn’t going to be a pin-up thing,” Marsh stresses.

The women are wearing black workout attire — very professional looking — and are shown working out in various parts of the Y: the fitness center, the free weights area, the walking track, the climbing wall and more. The calendar also includes motivational sayings and a listing of Y closings throughout the year.

Keith Mitchell, another Y staff member, took the photographs, which were shot in December.

“We did plan out what we wanted to do, and then we started taking pictures,” Marsh notes.

“It was fun,” Swicegood says. “We’re trying to highlight all the different areas of the Y, not us.”

Marsh has ordered 100 calendars to start. She plans to send a whole stack to her family in the Netherlands.

The calendars will be available for purchase after Jan. 5. Marsh and her staff are getting ready for the Y’s busiest season, January and February, when members start their resolutions in earnest. She says she hopes the calendar will help folks stick to their resolutions.

And don’t think the “Y Guys” are gonna be left out.

“I absolutely want to feature the guys next year,” Marsh says.

Word on the street — well, OK, around the Y — is that the 2016 calendar might even include Jamie Morgan, the Rowan County Y’s executive director. Or not, if he decides they’d raise more money without him.