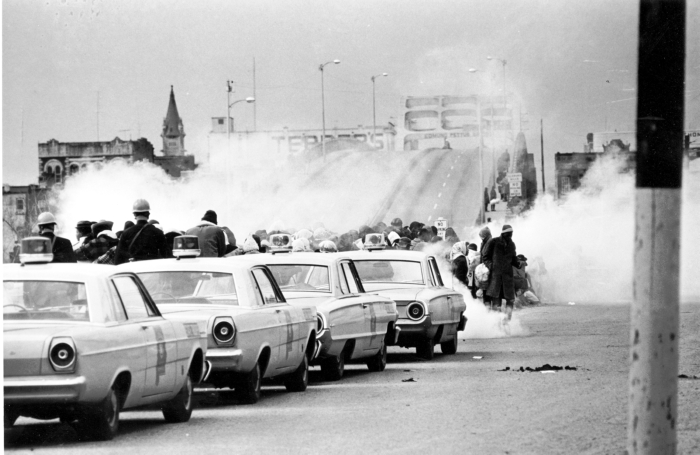 With 2015 officially under way, one of America’s most significant historical events looms as an ominous reminder of our past. Its 50th anniversary lies two months in our future. And the anniversary could serve as a catalyst for change in American society.

The year was 1965 — one of the most significant for civil rights activism in America’s history. A group composed of a few hundred protesters planned to march peacefully in Marion, Ala. — a small, rural town in Alabama’s Black Belt — from Zion United Methodist Church to the Perry County Jail.

The civil rights movement began long before the day’s events on Feb. 18, 1965. However, this particular march would lead — in many people’s minds — to the most significant 50-mile journey in America’s history. It’s a journey documented in the recently released movie “Selma,” named for a city in Alabama’s Black Belt.

Back to Feb. 18. The Marion marchers walked to the Perry County Jail — civil rights activist James Orange was being held there — with a plan to reverse course after singing hymns. Before the protesters could return to the church, they were met by law enforcement officers who beat the marchers and killed activist Jimmie Lee Jackson.

An Alabama state trooper shot Jackson twice in his midsection, and the activist died at a hospital in Selma. The state trooper was not indicted by a grand jury immediately. Four decades would pass before he was charged with first- and second-degree murder, and he eventually pleaded guilty to manslaughter.

The events in Marion resulted in the first Selma-to-Montgomery March on March 7, 1965. Some of the people instrumental in the marches lived in Selma and Alabama’s Black Belt. Others, such as Martin Luther King Jr., traveled from outside the state to ensure the marches, and ultimately the civil rights movement, were successful.

There were three marches all told. The first is, perhaps, the most notable.

On the first Sunday in March — now colloquially called “Bloody Sunday” — several hundred marchers, bound for Montgomery, Ala., crossed over the peak of the Edmund Pettus Bridge in Selma to find scores of law enforcement waiting on the other side.

John Lewis, now a member of Congress from Georgia, helped lead the first march. As Lewis and hundreds of others crossed the bridge, state troopers ordered the crowd to return to their churches, disband or go home. A shameful show of force ensued. The officers beat demonstrators with nights sticks, fired tear gas and charged into the crowd on horseback.

Despite the initial confrontation, the marchers and organizers were persistent, returning to the foot of the Edmund Pettus Bridge again and again. Once the group eventually left Selma’s city limits, its members slept in wet, muddy fields and walked through chilling rain to reach Montgomery 54 miles away.

Just over 49 years later, filming began for a movie about the 1965 events. It was released last month.

The movie “Selma,” filmed partly in the town it’s named after, has drawn rave reviews and several award nominations. Perhaps the film doesn’t do enough to highlight the “foot soldiers” in the movement. Nonetheless, the movie shows an important moment in our nation’s history and was released, coincidentally, after significant unrest in American society.

Each year, the events of March 1965 depicted in the film are remembered in Selma during the Bridge Crossing Jubilee. Following a few days of events, people march over the Edmund Pettus Bridge.

Since it’s the 50th anniversary, 2015’s Bridge Crossing Jubilee is big news in Alabama. Bloody Sunday has also resurfaced as part of a larger civil rights conversation following fatal shootings by police in 2014 – Eric Gardner and Michael Brown being the faces of the most notable incidents.

First and foremost, the nature of the ongoing protests that started in 2014 are different from the events in Selma in 1965. Bloody Sunday was about voting rights. For the most part, the protests were peaceful.

Events in Ferguson, Mo., where Michael Brown was killed, began violently. Marches around the country turned peaceful after ensuing incidents of police violence. The nature of how Bloody Sunday occurred versus 2014 events is also different.

Despite differences, the exact magnitude of congruence is irrelevant. Modern-day protests are about civil rights too.

So here we are — 50 years later. Again, Selma is faced with the very real possibility that the first Sunday in March could become a rallying point for protesters advocating the equal treatment of all human beings.

Josh Bergeron is a reporter for the Salisbury Post and formerly worked for The Selma Times-Journal in Alabama.