Despite great loss, woman offering up medical supplies for anyone who needs them 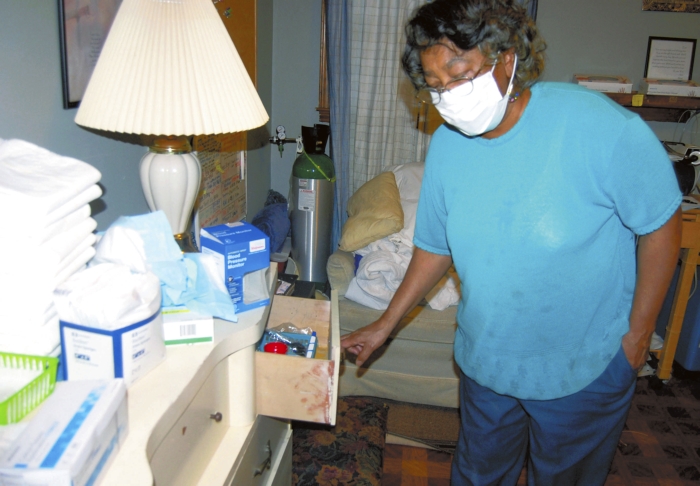 Linda Worth goes through drawers of unused medical supplies she purchased for her son's care. She's now looking for a new home for these items. Jeanie Groh/Salisbury Post

Even as Linda Worth is dealing with the grief of losing her son, she’s thankful for those who have rallied around her and is focused on giving back to others in need.

When Eric Worth’s home health-care nurse left Tuesday night and when Worth checked on him again at 2 a.m., he was “fine,” Worth said.

But when the nurse returned early Wednesday morning, he had passed away in his sleep.

“This was very unexpected,” Worth said.

Eric, who was 41, was injured in a car wreck when he was 6 and had been a quadriplegic for 35 years. He also suffered considerable brain damage in the accident.

Since then, Worth took care of Eric the best she could.

The back room in her small home on Craig Street was Eric’s room.

The walls are painted a light green and a hospital bed still rests in the back right corner. There’s a white dresser on the left wall loaded down with medical supplies, and a several medical machines rest on and under the table beside the bed.

A large, completed puzzle of an angel is framed and hung right above the head of the bed, and an icon of Jesus is hung beside it. Near the dresser, a bulletin board with cards from friends and family hangs, and a tabletop Christmas tree sits on another dresser at the foot of the bed.

“It still feels like he’s here until I go and see his empty bed,” Worth said.

At first, she kept the door closed, but now she keeps it open. She said it helps her deal with her grief.

Worth said she doesn’t want to turn his room into a shrine, so she’s going to clean it out so she can move into that room.

“I’m going to sleep in there,” she said, adding that she currently has the smallest room in the house. “We’ve got to let him go.”

Part of that process of moving into the room is clearing out the myriad of medical supplies used to care for Eric.

Rather than sell the supplies, though, she’s giving them away.

“If anybody can use it, they’re welcome to it,” she said. “I don’t like to sell stuff like that. It just don’t seem right.”

For Worth, it’s a way of giving back to a community who supported her in a time of great need.

In October 2011, she turned to the Salisbury Post when the Rowan County Housing Authority told her that her assistance would be cut off unless she got the gas turned on and caught up on her past-due bill.

After the story ran, “people started coming and helping me,” Worth said.

She was able to have the gas restored and catch up on her bills.

“That was one of the most wonderful things I’ve seen in my life,” she said.

Worth said that despite it all, she’s thankful for everyone who helped her several years ago and those who have surrounded her over the past few days.

“We are good and thank you so much,” she said.

If you or someone you know is in need of the medical equipment listed above, Worth can be reached at 704-870-8219.