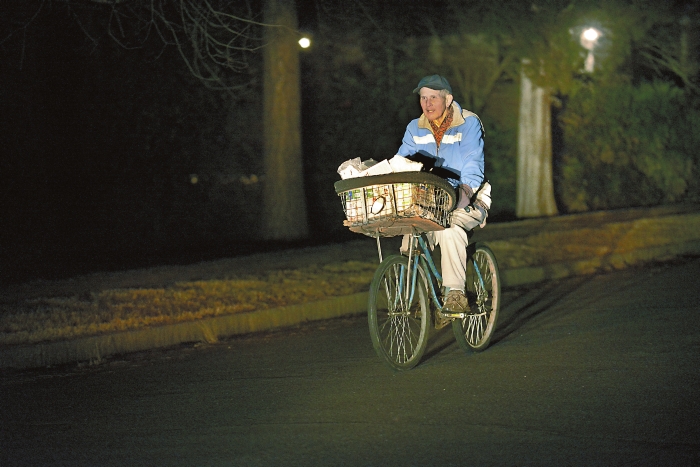 Eighty-three-year old Don Heidt delivers the morning Salisbury Post in the W. Colonial Dr. area about 6:30 a.m. on his last day as a paperboy riding his bike. photo by Wayne Hinshaw, for the Salisbury Post

The 83-year-old Heidt began dropping newspapers on front stoops in the mid 1980s. Other members of the Heidt family previously delivered papers on the route near Statesville Boulevard, but Heidt took the route in 1985. He delivered the afternoon Salisbury Post on a bicycle after work, just like his family previously.

Wednesday may have been the last day of 2014, but it was also Heidt’s last one delivering papers. His reason for deciding to retire is age, but also some health problems. Even so, Heidt says he’ll miss the exercise.

“If the weather was nice all the time, I might be willing to continue,” he said. “I did value and will miss the exercise. But with it getting colder, the weather has been more penetrating.”

More than an hour before the sun peeked above the eastern horizon Wednesday, Heidt started his route. With temperatures below freezing, he moved quickly, dodging from driveway to driveway. In most cases, he brought the papers to doorsteps rather than slinging them onto front lawns.

“There really hasn’t been much throwing of papers with a bicycle,” he said. “It allows me to go up to residences and just place the paper on the porch.”

Porch placement of papers is something Heidt said subscribers prefer.

Heidt’s route began on West Colonial Drive, just across from his house, and covered about 40 houses in his neighborhood. Most of the papers delivered were Salsibury Posts. A few were Charlotte Observers.

Perhaps the farthest point in his route from his house was the intersection of Jake Alexander Boulevard and Statesville Boulevard, where he delivered a newspaper to Community One Bank.

Despite the freezing temperatures on Wednesday, Heidt rode his aqua-colored bicycle, which matched the color of his winter coat. He admits that on some occasions — mostly inclement weather — he uses a car.

Heidt said he once owned a much nicer bike, but a thief swiped it right from his stoop.

“They just came onto my premises and took it,” he said.

The bike was a gift from his children. Regardless of the bike, he’s traveled thousands of miles during his time as a carrier, wearing out tires and multiple bikes.

In his more than 30 years as a carrier, he said the number of papers delivered has steadily declined. Heidt said the 100-residence route probably began with about 75 papers, but now he delivers about 38.

His family first took the route in 1979, after a route in northwest Salisbury was split in half. His family delivered the paper through 1984. Then Heidt took over.

With his retirement, Heidt said he’ll have to find another method to stay active, perhaps with a YMCA membership.

“It’s actually one of the reasons why I am regretting it,” Heidt said about his retirement. “The mandatory exercise was very beneficial.”

Animal shelter sees slight increase in adoptions over the…