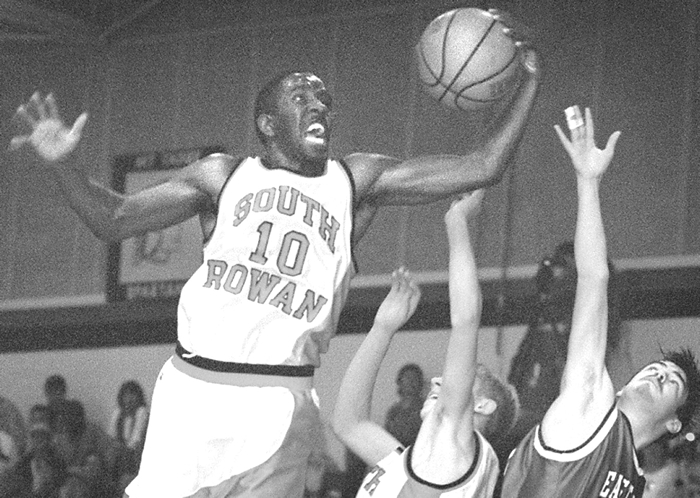 CONCORD — At 36, Tony Propst made the roster of a competitive minor league basketball team.

He’s been shot and he’s been crushed by a car. He’s had a blood clot in a lung and a steel rod inserted in a leg.

Through it all, he’s maintained a sweet jump shot.

On Saturday, the former South Rowan High School athlete will play for the Charlotte Elite at 3 p.m. at Cox Mill High School, against Winston-Salem Certified.  The teams play in the Tobacco Road Basketball League.

On Sunday, Propst will stand before his church in Matthews and tell the congregation how he made the team, 18 years after his days as a high school star.

“I’m not telling this story to be talking about me,” Propst said. “It’s about trying to inspire people, maybe inspiring some kids somewhere. Because it was only after I put the spiritual side of things first, that things worked out.”

Propst was a very good athlete at South Rowan in the mid-1990s. His father, Mike, and uncle, James Allen, were tremendous players for South Rowan’s powerful 1975-76 team that went 24-4.  A lot of those genes got passed down to Tony.

Tony quarterbacked South Rowan’s football team to a winning season in 1996, and while he was only 5-foot-10, he was outstanding in hoops. He was quick, he was tenacious, and he could shoot. He averaged 13.4 points for the Raiders as a senior, made All-Rowan County and moved on to UNC Pembroke with great expectations.

A broken bone in a foot set him back at Pembroke. Then he was back home. Next, he walked on at Charlotte’s Johnson C. Smith and made the team.

“I was redshirting,  but practicing with the team,” Propst said. “I was living in Kannapolis and commuting to Charlotte, and a man just walked into the house one day and fired a gun at me five times. They never found out who he was or why he shot me, but  he was looking for someone else. Two bullets hit me. One in the right hip. One in the left thigh.”

Propst was damaged as much emotionally as physically by the shooting.

“I got paranoid, wouldn’t even go outside at night, just sat in my room a lot,” Propst said. “I stopped playing ball for a while. Then I went and stayed with an uncle in Virginia Beach and got back on track. I went at rehab hard, got back in shape and went back to Johnson C. Smith.”

Coach Stephen Joyner welcomed him back to the school and the Golden Bulls.

“Coach always stressed the spiritual part of life above the physical,” Propst said.

Propst’s opportunity to get on the court for the Golden Bulls was sidetracked again — this time by that blood clot.

“Doctors told me I’d have to take blood thinners and couldn’t play competitive basketball anymore,” Propst said. “I was down. After some time, my mother  told me God had put that drive in me to play basketball for a reason, and that I should trust Him. I took a chance. I stopped taking the blood thinners. I went back to J.C. Smith to try to play ball.”

Propst was 25 years old by that time, and he was doing extra jogging after practice to try to keep up with the  20-year-olds. That’s when the car struck him.

“I was jogging about a mile a day in China Grove, and one day, a dog ran out and snapped at me,” Propst said. “It scared me, and I started running across the road. A Volkswagen Beetle hit me head-on, going 45 or 50 mph. It flipped me in the air, and I landed in a field. I broke my thigh bone, but I was lucky. I probably should’ve been dead. The car was just about totalled.”

Propst landed a few yards from his father’s house. An ambulance was summoned quickly.

Propst had a lengthy rod inserted in a leg, and he admitted to himself that basketball was history.

“I walked with a cane for a year and I was having terrible back spasms,” Propst said. “After a time , I tried to play again, but I could tell my game was off.  I thought I was done.”

As Propst turned 30, he got married to South Rowan classmate, Nakia Rhyne, and he became a father for the first time.

Propst’s wife could see how much he still loved basketball, and she encouraged him to work out and to play. He competed in local leagues and in the summer alumni games, and he could see his game coming back, bit by bit. He was encouraged enough that he began practicing more and trying out for semipro and minor league teams.

Propst had given basketball his best shot, and he was content. He was ready to start passing own his knowledge to the young guys, sharing the lessons he’d learned along his own long road. But there was a guy in Charlotte named Jamal  Slayton — “Coach Wink,” they called him  — and he’d been coaching semipro teams in Charlotte several years and was putting together a team to play in the TRBL in 2015.

“My pastor was the pastor at his wedding,” Propst said. “My pastor told him he knew about a player who was burning to play and he should give him a tryout. Coach Wink told him his roster was set, but that he’d give me a chance.”

“He said they needed a shooter,” Propst said. “When he told me I’d made the team, I  couldn’t believe it. I was overjoyed.”

League rosters are 15 or 16 players, with 12 dressing for games. Propst’s goal was to be one of the 12 who dressed.

And when Charlotte played a preseason game at Lumberton, there was a 36-year-old in the starting lineup. Propst’s stats were modest —   three points, four rebounds and three assists. But after the long road, he’s traveled, those three points felt like 30.

“Most of these guys on the team and in the league are in their 20s,” Propst said. “It’s going to be tough, but I’m doing what I love.”