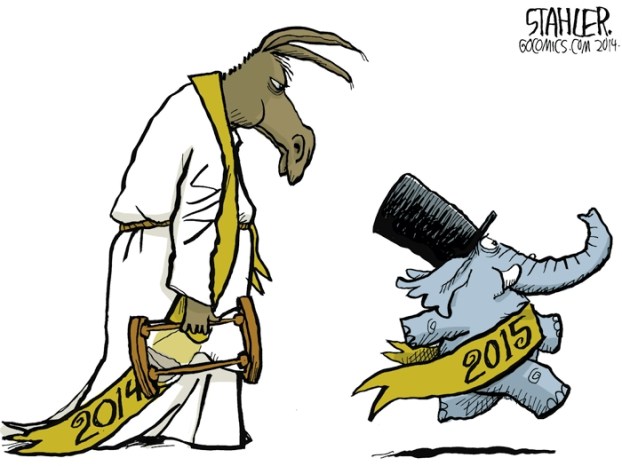 Ann McFeatters: 2014 was a showcase of political class’ idiocy, arrogance

WASHINGTON — As we vault into 2015, we are haunted by the same question we ask every year: When will politicians, especially those in Washington, ever learn?

For example, if you are a governor of New Jersey named Chris Christie and you want to run for president, despite being embroiled in an investigation into a scandal about whether your aides ordered lanes on a major bridge closed for political reasons, why would you veto a bill reforming the Port Authority, which oversees bridges?

And why, having said you favor reform, would you quietly veto said bill after it was overwhelmingly passed by legislators in both parties? And why would you do it during the Christmas holidays? And why at the same time would you have lunch in a famous Italian restaurant with the governor of another state, New York, who also vetoed said bill, which would take away patronage perks from both of you?

If you are a president of the United States named Barack Obama, why would you take over a golf course in Hawaii where a young Army couple planned to get married that day, forcing them to move their ceremony? Sure, you called the couple later to say you were sorry and thank them for their service but couldn’t you at least give them a present or a proper toast? Or play another day?

If you are an ambitious politician who strives one day to be the No. 3 Republican in the House of Representatives, do not speak to a white supremacist group, even if it just about taxes. Perhaps Rep. Steve Scalise, R-La., went to address a group founded by former Ku Klux Klan leader David Duke just because somebody told him to, but it should have seemed like a bad idea even back in 2002. It certainly does now that he has just been elected to the important post of party whip and the country is churning over racism.

Likewise, if you are a congressman being investigated on charges of felony tax evasion involving the hiding of $1 million in wages, do not threaten the life of a reporter questioning you on national TV. And do not vow never, ever to resign, as Rep. Michael Grimm, R-N.Y., did while admitting a few days ago he is guilty of tax evasion, before finally caving and saying he will resign. Especially do not say you don’t want to resign because you don’t want to let down your constituents.

If you are a U.S. senator who has an affair with the wife of a paid aide, do not put the arm on your friends to give that aide lobbying jobs. If you do that, as former Nevada GOP Sen. John Ensign certainly did, you may not go to jail, as your cuckolded aide did while also getting divorced and becoming unemployable, but thousands of documents ultimately will reveal how improper your actions were.

If you are a Republican lawmaker seeking to make your party more diverse (and, say, truly represent people who make less than $50,000 a year), do not pass legislation that permits rich couples to donate as much as $3 million to your party’s re-election campaign every two years. (Congress did it anyway.)

If you are a Democrat in the White House, do not say you caved and gave Citigroup exactly what it wanted _ far weaker federal regulation of Wall Street _ because it was a “compromise” that the American people needed to get a $1.1 trillion annual budget. Basically, Democrats agreed to capitulate to once again put taxpayers on the hook for bailing out banks. Big, big banks. And thus it became law.

Lessons learned? Apparently, none. Never. Ever.

Ann McFeatters is an op-ed columnist for Tribune News Service. Readers may send her email at amcfeatters@nationalpress.com.