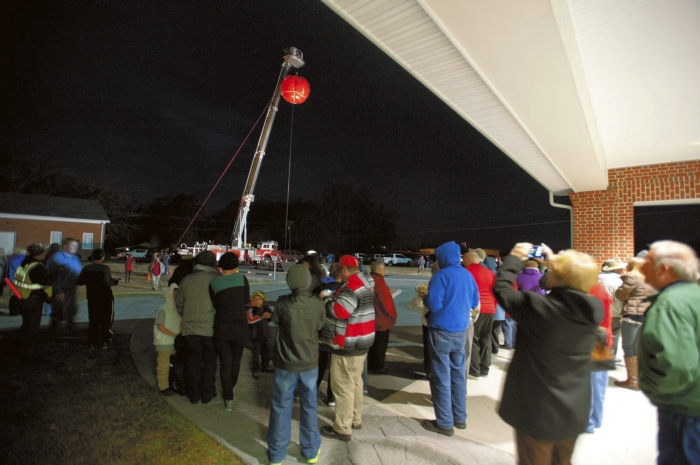 JON C. LAKEY / SALISBURY POST About one hundred people attended the first ever tomato drop at Unity Presbyterian Church in Woodleaf. A red 10 foot wide plastic inflatable ball with a stem and leaves to give the impression of a tomato was lowered to the ground as the year of 2014 came to an end. on 1/1/15 at inWoodleaf, NC, .

WOODLEAF — It wasn’t quite like New Year’s Eve in Times Square, but it was still a large, semi-round object that dropped from the sky to welcome 2015.

Residents came together Wednesday night to ring in the new year … with a Tomato Drop. The event was held at the Unity Presbyterian Church on Woodleaf Barber Road.

The giant, inflatable tomato was hoisted by the Cleveland Fire Department’s Ladder 45, a truck that served the Westbury Fire Department in New York and responded on Sept. 11, 2001.

Patti Safrit, who had the idea for the tomato drop, said, “I can’t wait for midnight.”

“Man, it looks sharp,” she said about the tomato, which has a 10-foot diameter and was raised 60 feet in the air.

A pulley system was used to raise and lower the Big Tomato.

The idea for the Tomato Drop sprung from the success of the tomato float, which featured the same tomato, in the Faith Fourth of July Parade and its popularity at the Woodleaf Tomato festival in August.  The festival’s organizing committee thought a New Year’s Eve event would work well too.

James Moore, a member of the festival committee, said “community fellowship” is what they wanted to have.

People enjoyed pizza, baked goods and hot cocoa as they waited for midnight to draw near.

The Tomato Drop even brought Elvis out to perform. He was portrayed by local musician Eddie Wetmore, who was the master of ceremonies.

Colton Sherrill, a talented, young musician also performed for the crowd of about 100 people.

When it was time for the drop, people who didn’t want to stand in the cold — the temperature was below 30 degrees at midnight — could watch a video stream of the event from inside the church hall.

But everyone came outside to watch the drop.

The tomato started to drop with one minute until midnight and everybody counted down the last ten seconds of 2014.

Safrit said she thought the drop went great as people stood around the tomato taking pictures. She said they plan to do the drop next year and make it an annual tradition.