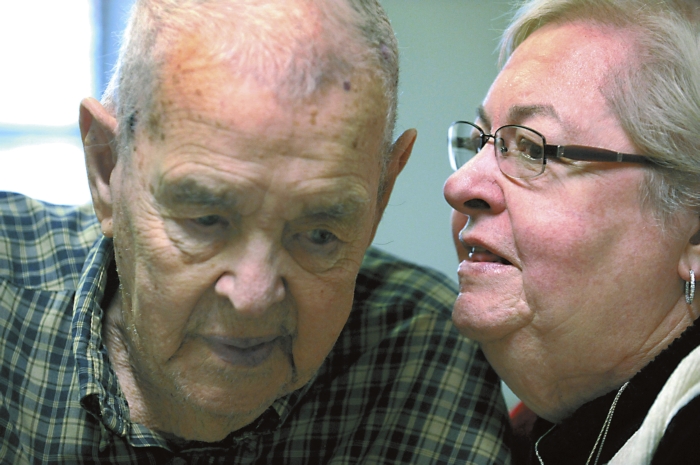 Glenn Jenkins will be 100 years old on Thursday, January 1, 2015. He wears his perfect attentance pins from his church for 25 years of perfect attentance. Hard of hearing, his daughter, Phyllis Marlow, is on the right gets close to talk to him. photo by Wayne Hinshaw, for the Salisbury Post

When Glenn Jenkins was just a toddler learning to walk he used a small wooden chair turned upside down to scoot across the floor of his parents’ home. The chair belonged to his mother and still sits in Jenkins’ bedroom.

The chair is only 30 years older than Jenkins, who celebrates his 100th birthday today.

He likes to joke that other than not being able to hear and being wheelchair-bound, he feels 30 years old.

His daughter, Phyllis Marlow, who was the first female born in the family in 150 years, leans into her father’s ear and prompts him to tell one of the stories she’d heard as a child.

The first piece of property he bought was on Kluttz Street in Kannapolis and cost him $40 an acre. His land purchase was before he was married to his first wife, Esther, in 1927. He married his second wife, Lucille, in 1985 following Esther’s death. Lucille died in 2010.

He met Esther through his brother, Marvin, who was married to Esther’s sister. Jenkins is one of five children, all boys, and Esther was one of nine children. He was born in China Grove, but said the family moved quite a bit. Jenkins lived in 12 houses by the time he was 12 years old.

He began raising beef cows. His life raising cows was short-lived, he joked, because Jenkins realized the high cost involved in feeding them.

In the years prior to the Great Depression, a gallon of gasoline cost 12 and a half cents, Jenkins said.

In those days, Jenkins added, he could buy three hot dogs for just 10 cents and a drink was three “coppers.”

He was a weaver at Cannon Mills, where he worked for 47 years.

“I didn’t make but 15 cent an hour working three or four days a week,” Jenkins said.

He estimated he made less than $400 a year while working at Cannon Mills.

When the county began issuing Social Security cards in 1936, Jenkins was one of the first to receive his. He still has the original card, which remains stain-free.

Jenkins bought his first vehicle — a Dodge pickup — at 40 years old. Before that time, he walked everywhere or just rode with someone.

Although Jenkins was drafted, he did not fight during World War II, his daughter said, because he did not pass the physical. During the air raids of the time, Jenkins would walk to his relatives’ homes to make sure they survived the planes dropping bombs.

He’s had perfect attendance at Sunday school at North Kannapolis Methodist Church for more than 26 years. He has the pins to prove it. He also served as Sunday school teacher at the church.

Jenkins recalls living in Kannapolis when there was only one paved road.

He’s lived at Big Elm Retirement for the past five years. Jenkins thought he’d marry the third Mrs. Jenkins inside the retirement center. His girlfriend, Imogene Williams, died on Feb. 22. Jenkins has her obituary hanging on his wall.

He misses her, he said.

Jenkins also has a picture on his wall of him, his son, Coit, and other Boy Scouts during a glass-bottom boat tour. Glenn Jenkins has been with the Boy Scouts for over 60 years and still attends meetings.

On one side of a bulletin board, Jenkins has colored index cards that list his family members’ dates of birth and death, some dating back to the mid-1800s.

Jenkins attended school through fifth grade, but his children said he was extremely good at math.

He would just doodle math problems on a piece of paper, Marlow said.

Marlow lives in the family home and has notebooks filled with her father’s math problems.

He recalled a time when school never closed.

“We went to school rain or shine. They didn’t call off school,” he said.

Jenkins and his brother would take a gun to school, prop it up behind the teacher’s desk and on the way home shoot a rabbit or two for the family to eat, Marlow said.

The secret to long life, Glenn said, was listening to and obeying his mother and father.

“Mother never told us what we had to do, but we ought to do,” he explained.