A season to savor: Caleb Stewart and Catawba baseball 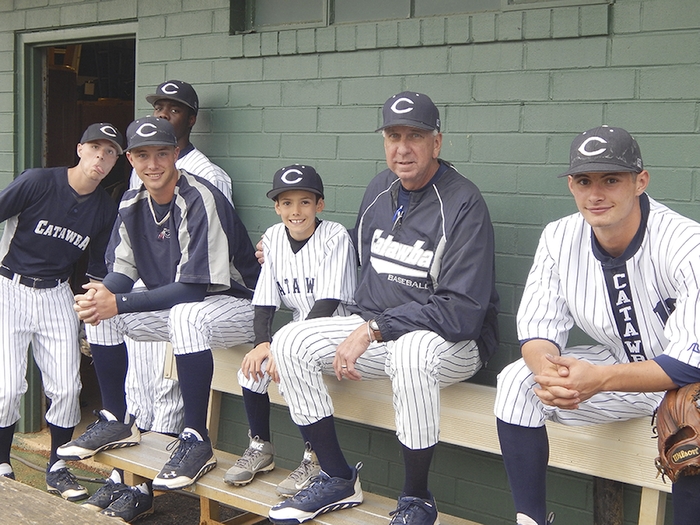 In just one year, 10-year-old Caleb Stewart of Advance has been drafted by Catawba Indians baseball, experienced a season on the team and even acquired a 2014 Conference Tournament Championship ring after his team’s winning season.

To say he’s ready for baseball season would be a gross understatement. It’s more accurate to say that he’s counting down the days.

Caleb is “just one of the guys, but he’s younger,” explains Indians Coach Jim Gantt, who says he’s proud to have this No. 34 on his team.

Caleb, the third child of Catawba alumna Shea Stewart and her husband Adam, has Cystic Fibrosis.

Thanks to an organization called Team Impact that connects college teams with children who have incurable diseases, Caleb was able to connect with Gantt and Catawba Baseball.

“I told them that we weren’t interested,” Stewart remembered, adding that it was Caleb’s doctor who insisted that we “let Caleb have this and let him do this.”

Finally, Stewart gave the caseworker a list of colleges within driving distance of her home and Stewart’s alma mater was on that list.

An e-mail from Team Impact to Coach Gantt helped make the connection.  Caleb and his mom came to meet Gantt and his players, and this young man was officially drafted, getting his own uniforms, a locker and a jersey that his new teammates had signed.

Caleb, who typically plays first or shortstop, even threw out the first pitch for an Indians’ game in March.

“After that, we went to all the home games and several of the away games,” Stewart said.  “Caleb was usually at practice at least twice a week when they had practices and we went to most games.

“These guys have come to our house to eat dinner. They’ve come to watch him play ball. To me, it’s no longer about baseball; it’s more like they’ve become friends and family,” she said. “Caleb is very shy, but he takes the game of baseball extremely serious. He’s not playing around. In his mind, that is his baseball team and that is his coach and he has got to do his very best.”

As the spring 2014 season came to a close with a conference championship, it was Caleb who walked out on the field to accept the team’s trophy. He was the team’s captain. It was Caleb who was lifted onto the shoulders of Catawba player Shaefer Shepard.

“He’s quiet, but he’s a good baseball player,” Gantt said. “He has a good arm. He smiles all the time and he eats all of the time.”

“I don’t see how Caleb can have the effect on them that they’ve had on him. They are making over him when he gets there. If they have batting practice, he bats with them. He’s with them. You would think he’s one of the players. They make over him and are so encouraging. They holler for him and cheer him on. It’s like he has 40 big brothers,” Stewart explained.

And even during Caleb’s down times, his team has been there for him. He was scheduled to go into the hospital for a couple of weeks this fall around the time his Little League season was ending. He asked his doctor if he could delay going into the hospital to play his final game of the season and the doctor agreed.

“Coach Gantt and the entire team got on vans and went to that game,” Stewart said. “Caleb got a homerun that night and those boys went crazy.  They even gave him a care package to take to the hospital with him and several guys even visited him in the hospital.”

“This whole thing has been nothing that I’ve expected,” she added. “We’re just really overwhelmed. Just when we think things couldn’t get any better, they outdo themselves.”

As 2015 looms, Caleb and his team are making plans, and his mother, who never watched a Catawba baseball game while she was a student at the college, is anticipating being in the stands to watch her son and his Catawba teammates.

“He’s looking forward to spring and the team is going to Alabama in February and Caleb’s wanting to go to Alabama. He’s excited. He hasn’t had a chance to get to know all of the new guys,” she said

Nor have the new guys had a chance to get to know Caleb, but when they do, Gantt is sure it will make a lasting impression.

“Being associated with Catawba baseball is not only good for Caleb, but it’s good for our guys,” Gantt concludes. “It’s a privilege to be able to play college sports and being with Caleb reminds us of that privilege and that it is a privilege, not a right.”

Gantt’s players play their first home game of the new season in a double header Feb. 1 beginning at 2 p.m. against Belmont Abbey.