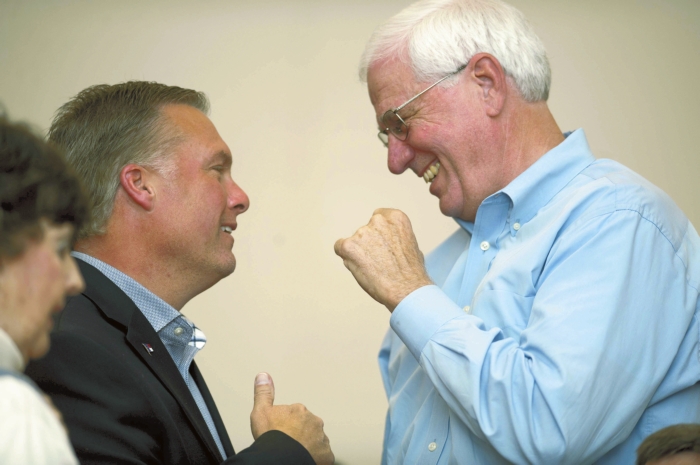 He was a native son and a wunderkind, so when Doug Paris became the seventh city manager in Salisbury history at the relatively young age of 28, it was big news.

That was July 2012. Not two years later, in June of 2014 and with a year left on his contract, Paris was out of a job. His separation came at the end of a five-hour City Council closed session. City officials called it a “mutual” decision.

For weeks, though the Post asked repeatedly, no one would say any more. Speculation fills a void, as Mayor Paul Woodson acknowledged in a June 24 article on Paris drafting his own letter of recommendation, which the mayor signed.

“There are a lot of rumors going, and I don’t know if any of these rumors are true,” Woodson said. “I’m going on facts.”

As the City Council stonewalled on the reasons behind cutting ties — and Paris stayed silent — attention turned to his severance package, which totaled nearly $210,000 in salary and leave payout. Turns out Paris had negotiated a much better deal for himself than his peers in the region, even those with far more experience.

And then it came to light that Hasselmann, who had been making $83,000 a year — more than other public information officers in the region — had received a $30,000 severance even though she had no contract and the city was not obligated to pay it.

Hasselmann said she was resigning because Paris left. It’s still not clear why he did, though, and his sudden departure was made even more dumbfounding by his rapid ascension to the city’s top administrative position.

A 2002 graduate of East Rowan High School, Paris took a $13-an-hour internship with the city in 2006. A year later, he was hired as assistant to then-city manager David Treme. He was promoted to assistant city manager in 2010.

When Treme retired in 2011, Paris became interim city manager, then City Council selected him for the permanent job from a pool of 70 applicants in 23 states, some of whom had decades of experience. City Council members heaped praise on him. He was the Post’s newsmaker of the year for 2012.

As the City Council searches for Salisbury’s next city manager, no one is forgetting the last one and his unceremonious exit. Paris was a rising star, and when that star fell in his hometown — or ceased rising by mutual agreement — amid a constellation of still-unanswered questions, it was big news.

The editorial staff of the Salisbury Post has voted Paris’ exit from Salisbury City Hall the top local story of 2014. Here are the other stories that made the top 10:

The Rowan County Board of Commissioners began the year with a firm majority behind then-chairman Jim Sides and a plan for transforming the former Salisbury Mall into a new government center. It ended the year with a new majority — one that Sides isn’t a part of — and uncertainty about the former mall’s future.

Sides a dedicated conservative whose opponents often labeled him an obstructionist to progress, was the main target of a new political action group, La Resistance, which campaigned heavily against him in the Republican primaries. Whether it was because of La Resistance or not, Sides finished fifth out of eight GOP candidates and didn’t make it to the general election.

Two more seats opened when commissioners Chad Mitchell and Jon Barber chose not to seek re-election. Mitchell ran unsuccessfully against N.C. Rep. Harry Warren. Barber’s exit came after a somewhat turbulent tenure punctuated by an investigation into his use of a county-owned copier to produce thousands of personal documents. He pleaded no contest in September.

Three new members on the board — new Chairman Greg Edds, Vice-Chairman Jim Greene and Commissioner Judy Klusman — say they’re trying to improve relations with other government entities. They’re taking things slowly with transforming the mall and working with Salisbury city officials, who feared an exodus of county employees from downtown.

“Grandma, they are shooting again,” Carolyn Rice’s 16-year-old granddaughter told her the night of March 22.

They didn’t think much of it, since it happened frequently in their neighborhood. But the next day, when Rice’s granddaughters tried to watch their bedroom TV and found a bullet lodged in it, they realized how much worse this time could have been.

That’s one of many stories the more than 2,000 residents in the West End had to tell this year when their pleas for help reached a crescendo. They feared for themselves and their families as gun violence and other crime climbed in the West End while falling elsewhere in the city.

The Salisbury Police Department responded with new strategies, including a police substation in the West End. And a new community relations officer walks a beat there, interacting with residents and asking for their help in overcoming crime.

Others stepped up, too. Livingstone College cleaned up vacant properties it owns in the West End. Community groups began new programs for youth and formed nighttime patrols throughout the neighborhood.

Residents pray it works, residents such as Rice who realized in March that if the bullet had taken a slightly different trajectory, it wouldn’t have struck the TV. It would have struck her granddaughter.

Oct. 13, a Monday, was a typical day at the Rowan County Register of Deeds Office, Assistant Register of Deeds James Furr told the Post. The only thing different was a slight change to the marriage license application the office handed out that day.

To some of the people filling out that new form, though, it made a huge difference.

That was the first day same-sex couples in North Carolina could register to be wed. It came just a few days after a federal judge struck down the state’s gay marriage ban and the Supreme Court refused to hear an appeal of a similar ruling in Virginia.

There wasn’t a rush on the Register of Deeds Office. Three couples got their marriage licenses the first day they could, and only seven the first week. And those who did said that for them, it was less a momentous occasion than finally gaining legal recognition for what they already had.

After a massive Feb. 2 spill at a Duke Energy plant in Eden polluted 70 miles of the Dan River with coal ash, attention focused on the potential hazard posed by Duke’s other coal ash basins across North Carolina — including at the Buck Steam Station on the Yadkin River in Rowan County.

Coal ash contains toxic chemicals, and residents who live near the Buck plant say their water has been tainted by it, a claim Duke denies. The state has offered to pay for testing of private wells near the plant.

In the wake of the Dan River spill, the General Assembly enacted legislation regulating coal ash and ordering Duke to clean out or seal its storage ponds. Duke wants its customers to shoulder most of the $10 billion projected cost.

Rowan’s weren’t among the ponds the General Assembly placed on a high-priority list to be completed in the next couple of years. In early December, the Waterkeepers’ Alliance said coal ash was seeping from the Buck impoundments into the Yadkin and said water testing proved it. Duke has questioned the test results.

For one local story, 2014 ends much the same way it began. Erica Lynn Parsons is still missing.

But there have been developments in the story surrounding the girl who hasn’t been seen in Rowan County since November 2011 and was reported missing in July 2013.

Federal officials say Erica’s adoptive parents Sandy and Casey Parsons — who never reported her missing and still claim she went to live with a woman they believed was her grandmother — continued to collect adoption benefits and other government assistance for her care.

In July, one year after Erica’s adoptive brother reported her missing, the Parsonses were arrested at their home in Fayetteville and served a 76-count federal indictment charging each of them with conspiracy to defraud the government, identity theft, theft of government funds and mail fraud, among other things.

Initially, both denied the charges. Casey Parsons pleaded guilty to 16 counts in October. A jury found Sandy Parsons guilty of nearly all charges later that month.

Sentencing for both is scheduled for February.

There was more good economic news than bad in 2014.

Apparel maker Gildan continues its expansion, announced in late 2013, and is ramping up to hundreds of local jobs. And on Dec. 22, Agility Fuel Systems, a California company that makes natural gas systems for heavy trucks and buses, announced plans to build a 200,000-square-foot regional headquarters off Julian Road that will eventually employ more than 250 people.

Even Freightliner said in October the company was having trouble filling hundreds of jobs at its Cleveland truck manufacturing plant.

In October, the county’s unemployment rate fell to its lowest level since 2008, and it dipped again in November.

Meanwhile, the people getting jobs will have more places to spend their earnings. The company that put together the Wallace Commons shopping center off Interstate 85 at Julian Road has started looking for tenants to fill a new shopping center across the interstate, with Dick’s Sporting Goods and Hobby Lobby as anchors.

The Rowan County Board of Commissioners wasn’t the only government body that saw big change this year. The Rowan-Salisbury Board of Education has new members and new leadership.

In November, voters ousted Kay Wright Norman — after 20 years on the school board — and L.A. Overcash, replacing them with Dean Hunter and Travis Allen, who promised “some big changes” on election night.

That change began when Dr. Richard Miller, who won re-election, was replaced as chairman by Josh Wagner, who — like Hunter and Allen — had frequently been critical of the previous majority’s decisions.

Before that majority left its seats, however, the board voted to go ahead with a central office in downtown Salisbury. County commissioners will consider loan proposals for that facility next week.

And the school board has other big projects to consider, including a consolidated elementary school in western Rowan County and needed renovations at Knox Middle School.

This year, people around the world became all too familiar with the terrorist group rampaging through Syria and Iraq known as ISIS.

In August, we learned the name 44-year-old Donald Ray Morgan, and his story shook local residents just as much.

A Rowan County native, Morgan was arrested Aug. 2 at John F. Kennedy International Airport as he returned from Lebanon, allegedly on his way to Rowan to sell illegally sell a gun he wasn’t supposed to possess as a felon.

Morgan, a former law enforcement officer, auto salesman and bodybuilder who converted to Islam when he lived in Salisbury, admitted that he tried to cross into Syria and join ISIS. He pleaded guilty in October to attempting to provide material support to a designated terrorist organization.

His sentencing is scheduled for February.

A China Grove doctor, his wife and six others — including several local educators — were charged in July in what authorities called a prescription fraud scheme.

According to local and state investigators, Dr. Orrin Walker wrote fraudulent prescriptions for the pain killer hydrocodone. His wife Abby then coordinated with the other suspects — in whose names the prescriptions were written — to pick up the pills and deliver them to the Walkers.

Four of the suspects, including Abby Walker, worked at Bostian Elementary School. She was initially suspended, then resigned.