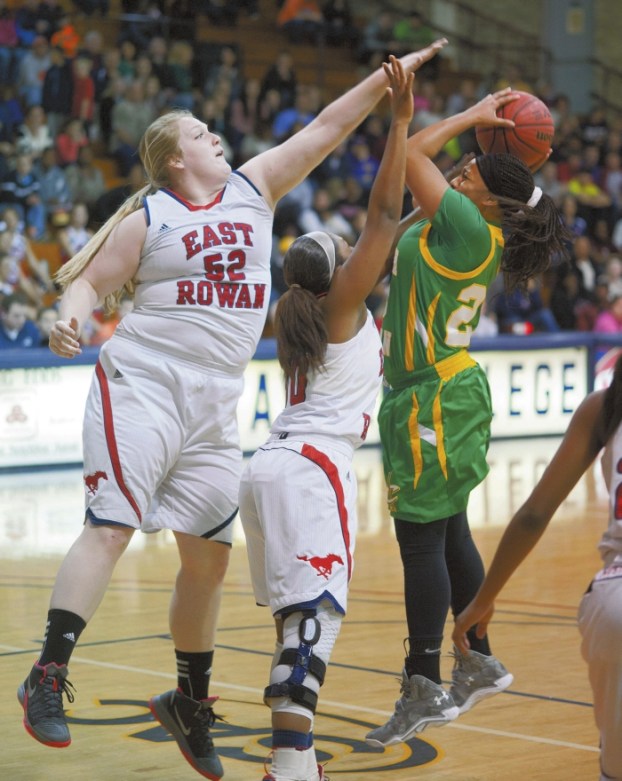 SALISBURY — The underlying theme for the East Rowan girls in this year’s Sam Moir Christmas Classic was redemption.

They achieved that goal, but their 62-56 championship game win over North Rowan on Tuesday at Goodman Gymnasium really came down to holding it together and executing in the crucial waning minutes.
The Mustangs held a slim 49-47 lead with just over five minutes remaining when they went on a 6-2 run that gave them the breathing room they needed.

Tournament MVP Kelli Fisher hit a short jumper with 1 minute, 35 seconds remaining to make the score 55-49 then Jocelyn Lowe, Amani Ajayi and Shenell Pharr combined to hit 7-of-10 fouls shots and expand the margin to nine.

“It was our main goal to come out here and outrebound them, not let them speed us up and just play our game,” said the senior forward Ajayi. “We just had to hold it together and play our game.”

A 3-pointer at the buzzer by North Rowan’s Demeria Robinson produced the final margin, but the outcome was long decided. It was the first Moir title for East Rowan since 2001 and their eighth overall.

The Mustangs (11-1) came in as the top seed and made it stand with wins over Salisbury, Mooresville and defending champion North Rowan (5-4).

That was where the redemption part came in as the Cavaliers crushed the Mustangs in last season’s Moir final.

“Last year was a very tough time for us,” Fisher recalled, “and we got embarrassed really. So were ready to come out and get what we deserved even though it wasn’t easy.”

Both teams played to their strengths in the early going as East worked the inside game and North used its speed and defense. Surprisingly, however, North Rowan took control early with a barrage of 3-point bombs to take a 20-9 lead early in the second quarter. They connected on four in a row, including one by reserve forward Fredejah Royer.

But the Mustangs did not panic and battled back behind Fisher and forward Kaleigh Troutman to get back in the game by halftime. Fisher had two buckets, and Troutman scored eight as they trimmed the North Rowan lead to 31-27 at the break.

The Mustangs finally caught and passed the Cavaliers midway in the third period on two foul shots then a 3-pointer by point guard Jocelyn Lowe to make it 38-35. Shenell Pharr connected from beyond the arc to give them the lead for good at 43-38 late in the third period, setting the stage for the late-game heroics.

Mustang coach Danielle Porter used an ironman crew of just six players in the game and all played a key role in the title win.

“Each one of those girls is a pure competitor,” Porter said. “There have been times in the past where we would have folded in situations like this. But to have a team of competitors like we have, that just means winning championships. This means the world to us.”

North Rowan was hampered in its effort by a miserable 20-of-75 shooting performance including five straight misses in the final three minutes when East Rowan was pulling away.

“I thought we played hard for most of the game, ” North Rowan coach Brian Lytton said. “But when you shoot 20 for 75 it is hard to win any game.”

Fisher was the obvious MVP with 18 points, 17 rebounds and 5 blocked shots in the title game. Her teammate Pharr joined her as did North Rowan’s Robinson and Aliyah Farmer. Also named was Davie’s Madison Zaferatos and South Rowan’s Avery Locklear, who scored 79 points in the event and became the Raiders’ all-time career scorer in the process.

Robinson, who led North Rowan with 17 points, also won The Ronz award, named for the late Ronnie Gallagher. Gallagher was the longtime sports editor for The Salisbury Post. It goes to a player on the runner-up team who displays good character, athleticism and sportsmanship.