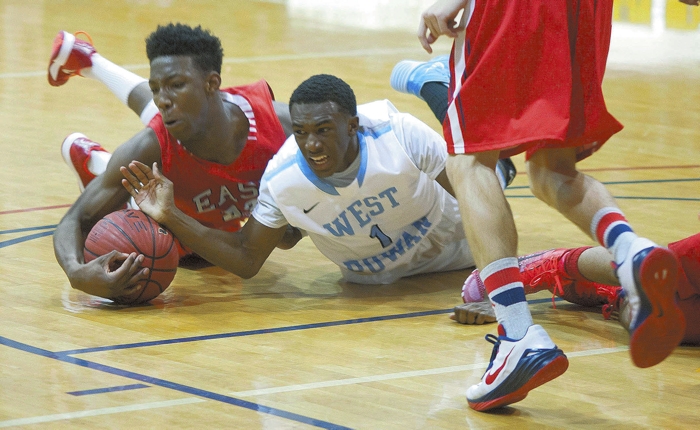 Tournament MVP Celexus Long and Kortez Weeks combined for five 3-pointers as the Falcons built a 30-12 lead after 15 minutes, and the way the Falcons play defense, it was over. The final was 58-41, and fifth-seeded West Rowan celebrated its first Moir championship since 2005. Gurley won his fifth title, tying Sam Gealy, who won one with North Rowan and four with Salisbury, for the record.

“I don’t know if they’ve made five 3s in a game all season,” said East Rowan coach Trey Ledbetter, shaking his head. “They shot the ball great and when they missed, they got second shots.”

Seventh-seed East Rowan got four 3-pointers and 14 points from Bravon Goodlett and 13 points from Tay Davis.

“They’ve got some quick guards,” coach Mike Gurley said. “Trey’s really got some young guys he can build a great team around.”

Weeks got the job of defending Davis. He also drew the assignment of defending Carson’s Marquez McCain and South Rowan’s Qwan Rhyne in the tournament.

“Kortez is a heck of a defender and he’s made defense his priority, but he also knocked down some really big shots,” Gurley said.

“(West guard) Martavio Rankin was able to bring my man to him with penetration, and I was getting the open looks,” Long said.

Long has enjoyed huge games in his career, including a 30-point explosion, but he’s been averaging 10 points per game as a senior.

“He’s had injuries and illness, but he’s still  been leading by example,” Gurley said. “Tonight was the most involved he’s been offensively, and it was great to see his shots going in. He really picked us up.”

Ledbetter felt the Mustangs could make a move at some point in the second half, but his sharpest shooters stayed cold (Austin Love and Logan Shuping were 1-for-14) and the Mustangs got smashed on the boards by Caleb Mauldin and Greg Joseph.

Mauldin, a freshman, finished with 15 points and 13 rebounds. Weeks had seven rebounds. Joseph, the hero of the semifinal win against South Rowan, got on a major roll in the fourth quarter and finished with 18 points on 8-for-9 shooting.

“Joseph and Mauldin give 100 percent and they’d give 120 percent if there was any way to do it,” Long said.

The Falcons outrebounded the Mustangs 45-22.

“Their defense was good, but it’s not like we couldn’t get looks,” Ledbetter said. “We actually got great looks at times, but we didn’t make them, and we just got pounded on the glass. Still, this tournament was all positive for us. We won two, we made the final, and we got closer and better as a team.”

East Rowan was held to 31.3 percent shooting and 5-for-23 on 3-pointers.  West Rowan held three tournament opponents to an average of 41 points per game, so the Falcons’ return to prominence was mostly about defense.

“We had a really tough game with South [Rowan] on Monday, so I was concerned about how much energy we’d have,” Gurley said. “We shot and we looked at film, but mostly we rested for another tough fight. We put together a really solid effort and we beat a good team.”

West Rowan’s Long was named the tournament MVP, and he was joined on the all-tournament team by Weeks. Representing East Rowan on the team were Davis and Goodlett. The other members of the six-man all-tournament team were Jay Davis, who keyed two Mooresville wins, and Jordan McDaniel, who led Davie County to two victories and third place.

The Ronz Award, named for the late Ronnie Gallagher, stayed in the family. West Rowan scorekeeper, and son of the late Salisbury Post sports editor, Mackie Gallagher was the recipient on the 2014 award, which recognizes character, sportsmanship and hustle.