Solar panels going up in Salisbury 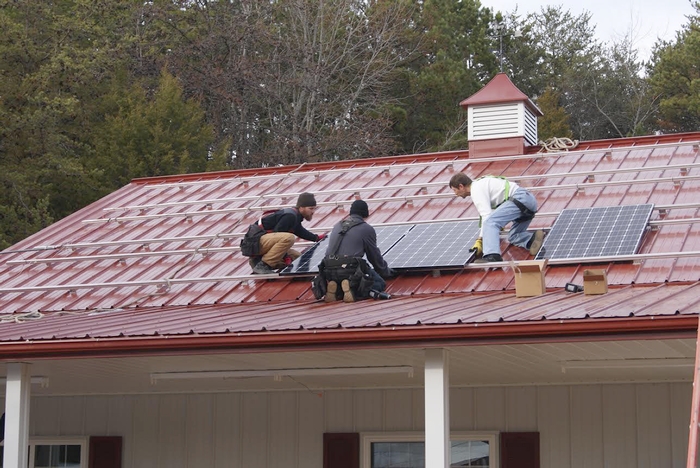 Solar panels are sprouting up in Salisbury and Rowan County, thanks to a community initiative that started in October.

Solarize Salisbury-Rowan informs residents of the advantages of solar power and helps them reduce costs through competitive bids by installers who have already been professionally vetted. It is a cooperative venture of SmartPower, a national nonprofit organization that focuses on clean energy, and the Center for the Environment at Catawba College.

Lane Wallace, Solarize Salisbury-Rowan coordinator, notes that 2015 is potentially the last year to take advantage of the North Carolina state tax credits , which are due to expire December 31, 2015. The Solarize project assistance, initially offered the last three months of 2014, will be extended until January 14.

“It has been heartening to see how many people are interested in solar energy,” Wallace says. “Solar is actually very competitive as an investment and as an energy source. Studies show that investing in solar right now can show returns 20 to 30 percent higher than investing in taxable mutual funds for homeowners. And it is a relatively risk-free investment.”

Wallace refers to a statement by Jim Warren, executive director of NC WARN: “Solar photovoltaic power is now cheaper than kilowatt hours from newly constructed dirty power plants when all costs are considered.”

Paul Bardinas, CEO and president of Freirich Foods Inc. in Salisbury, had already installed solar panels on his business so he knew about the advantages of solar power.

“It’s working as promised,” he says, “and on track to pay for itself within 10 years.”

ReNu Energy Solutions installed solar panels on his family’s home Dec. 19 through the Solarize program. The installation will provide 75 percent of their electricity, including providing power for his and his wife Carrie’s Nissan Leafs, which are all-electric vehicles.

Bardinas calculates that his home installation will be totally paid for in eight to nine years, assuming no rate increases from Duke Power.

“Then it will produce power potentially for another 20 years after that,” he says. “That’s essentially free money.”

Bardinas notes that this installation has been easier than the one on his business because of Solarize Salisbury-Rowan.

“It has brought regional installers that I didn’t know about to this market,” he says. “Bringing those two groups together – folks who are interested in solar and qualified technicians and installers that can do the work – has helped a lot. Beforehand, I had to go to South Carolina to find somebody to do our commercial project. It took a lot of time and effort to vet those people.”

John Wear, executive director of the Center for the Environment, is pleased with the interest Salisbury-Rowan residents and business owners have shown in solar power.

“It’s not only cost-effective,” he says. “It’s also good for the environment. Solar energy users automatically lower their ecological footprint by using this renewable source.”

For more information on the program, log on to www.energysage.com/salisbury-rowan .