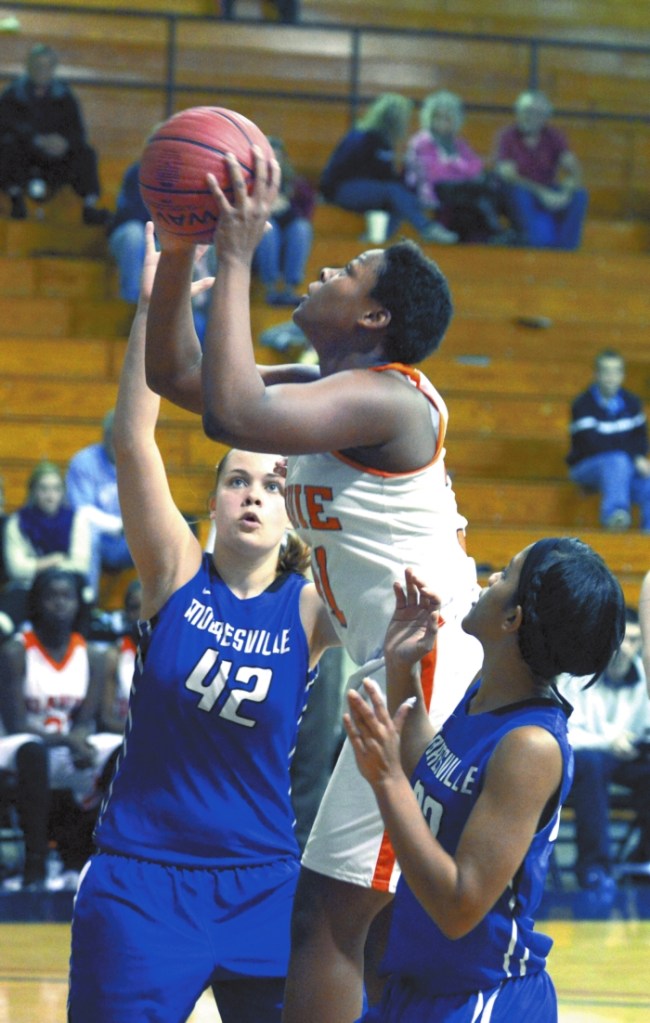 Davie's Aubrianna Peebles #31 putting the ball back up against Taylor Boorlase #42 and Tatia'Anna Padgett #32. photo by Wayne Hinshaw, for the Salisbury Post

SALISBURY — The battle for third place was a tight one at Goodman Gymnasium on Tuesday. Second-seeded Davie County and fourth-seeded Mooresville changed the lead eight times and were tied another eight.

Aubriana Peebles’ putback of a missed layup by Sha-veh Martinez with 6 minutes, 46 minutes left in the game gave the War Eagles a 32-30 lead.

Davie County was in front the rest of the way for a 45-37 win to claim third place in the 43rd annual Sam Moir Christmas Classic. Davie County went into the game still worn out from a semifinal battle with North Rowan and a bit of disappointment it was playing for the bronze medal.

“But we found a way to get it done today. I’m proud of them for that.”

Peebles was tough on the inside and left as the game’s leading scorer with 17 points. She also had six rebounds.

“She’s got such good hands. She’s got such a long reach. It really just enables us to put the ball in the post to her on a lot of different occasions,” Ruemenapp said. “…She gives us a really nice spark off the bench.”

The first half was a struggle for both teams. Neither team led by more than four points. A 3-pointer by Amber Sherrill from the left wing only 34 seconds into the second quarter pushed Mooresville’s lead to 10-6.

Sherrill also had a highlight reel play at the end of the half. She grabbed a rebound along the baseline under Davie County’s basket with about 10 seconds left. She took off up the sideline in front of her team’s bench. She released the ball with a running shot just a few feet beyond the arc and made contact with Peebles.

The ball swished through the net just after the buzzer sounded, and Peebles was whistled for a foul. Sherrill converted the four-point play for a 19-17 lead at the break.

Sherrill scored 16 points for the Blue Devils, who finished fourth in their first year in the Moir Classic.

A surge by Peebles that bridged the end of the third and start of the fourth quarters was the deciding factor. Peebles scored four of the War Eagles’ last six points in the third and their first five points of the fourth quarter. Her two putbacks of a pair of misses by Martinez early in the period provided enough of a cushion for the War Eagles to come away with the win. Athlete of the Week: Lavon Hill