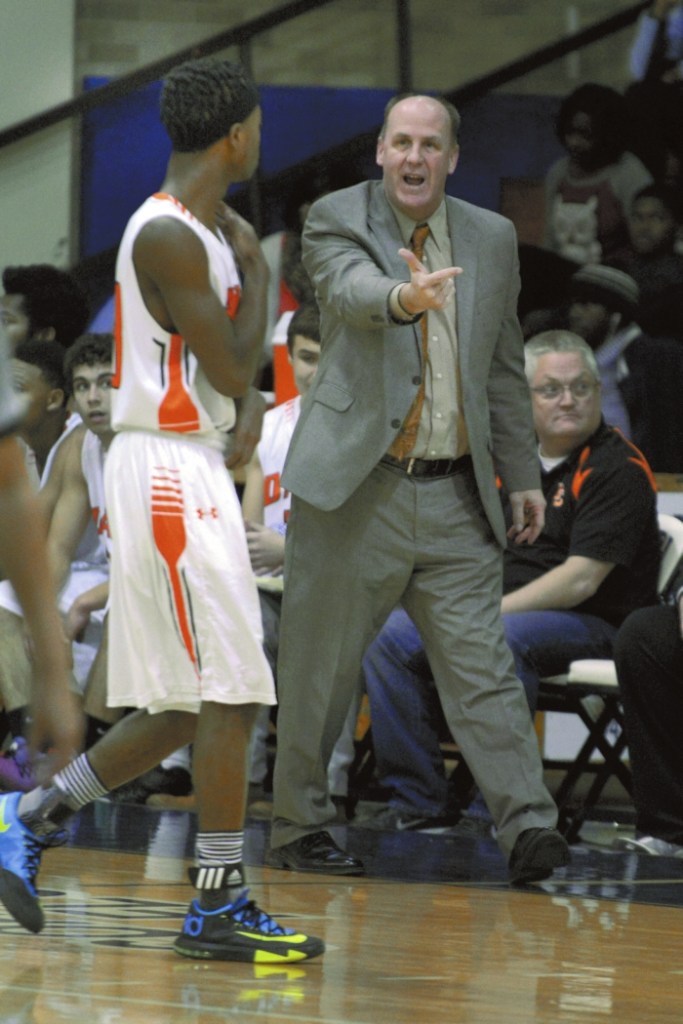 SALISBURY — A wire-to-wire win came at an emotional time for Davie County head coach Mike Absher. The No. 6 War Eagles never trailed No. 8 South Rowan in a 46-36 victory in a battle for third place at the Sam Moir Christmas Classic.

The win came just hours after Absher’s father passed away.

Absher did not coach Monday’s semifinal game against East Rowan, a loss that put the War Eagles in the race for third. He said he spoke with a pastor who is on the War Eagles’ coaching staff and took the advice to be with family. He was on the sidelines for Tuesday’s victory.

“It’s been difficult,” Absher said. “It really has. But that right there was a lot of fun. I hesitated to come today because he literally passed away about 1:30. But obviously I’m glad that I was here, and it was kind of nice to get away from it a little bit. I’m really proud of our guys today.”

The War Eagles were in control from the start. A 7-0 run in the first quarter gave them a small cushion, but they were able to protect it the whole game. Absher said a good start was necessary to win because it’s easy to give up when things start working against the team.

The first half ended with a backdoor layup by Jordan McDaniel off a nice bounce pass through the lane, and the teeth of the Raiders’ defense, from Cooper Wall. That easy bucket put the War Eagles ahead 29-18 at halftime.

McDaniel finished with a game-high 14 points. Wall threw in 11 points and had a game-high four assists.

Nic Starnes’ time on the court was short lived. When diving for a loose ball in front of the South Rowan bench in the opening minute, Starnes tangled with a Raider and stayed on the ground clutching his right hand. He did not come back. Absher said that play set the tone for the War Eagles.

The Raiders cut their deficit to 29-26 with an 8-0 run coming out of halftime sparked by Tre Littlejohn and Tyler Rary. South Rowan continued with another 5-0 run in the second half of the period. The Raiders were down only 32-31 at the start of the fourth quarter. Davie County scored only three points in the third quarter.

The War Eagles, however, pulled away with a 9-3 run to start the fourth quarter. After fighting their way back into the game in the third, the Raiders scored only five points in the fourth.

“This game was lost last night [against West Rowan in the semifinals] and not today,” South Rowan head coach Bryan Withers said. “We had the heartbreaker, and I was afraid of that. But it’s my job to get the guys going.

“One of the things I had to do, you saw, I had to bench guys that I need to play. When three leaders are 5-for-36 from the floor, and that stat could have been 5-for-50 if I let them play long enough. That’s why I benched them. You can’t win like that.”

Seniors Tyreek Wilder, Qwan Rhyne and Lavon Hill combined for 16 points on 5-for-36 shooting. Rhyne had a team-high eight rebounds. Littlejohn led the Raiders with 10 points.