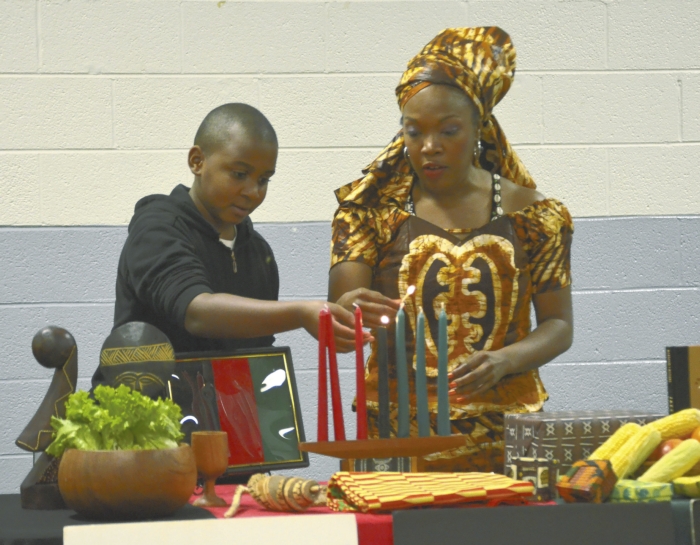 Myriah Harris first learned about Kwanzaa during a Girl Scout program a few weeks ago.  Her mother, Myra, thought it would be interesting to learn even more about the principles of this 48-year-old holiday.

Kwanzaa is a nonreligious holiday that begins Dec. 26 and is celebrated through Jan. 1. The holiday was created in 1966 by Dr. Maulana Karenga, an African studies professor at California State University. The holiday celebrates family, community and culture.

This year’s event, which is in its 20th year, was celebrated on Saturday at the City Park Recreation Center. Today is Ujamaa, the fourth day of Kwanzaa. In some Kwanzaa celebrations some families go to each other’s homes on a different day.

Quadirah said the event changes from year-to-year, but the event centers on the seven principles known in Swahili as Nguzo Saba.

The greetings during Kwanzaa are in Swahili. Gifts are given mostly to children that include a kinara or candle holder, a book, African-based folktales, or something handmade.

The red symbolically represents the struggles of the African ancestors that included the blood that was shed, while black represents the African people and green symbolizes the fertile land of Africa and the hope that comes from their struggle.

The Harris family, which included Malakie, 9, attended the event for the first time.
Norman McCullough attended with his wife, Darnell. Norman is a history professor at Rowan-Cabarrus Community College who focuses on American and African-American history.

“It’s important, especially for our young people, to know about their foundation,” McCullough said.

He said Kwanzaa is about self-esteem and you feel about yourself as a person.

“I want them to take responsibility for learning and be inspired to learn and do something,” said actress and writer April Turner.

Turner facilitated the event with explanations about the history of Kwanzaa and she also shared an African folktale and music with the audience. Nearly every audience member was given a musical instrument to play.

There were a few vendors and artisans at the event including the Spencer Doll and Toy Musem.

Retired educataor Sandra Smiling was one of those artisans. She’s originally from New York, but now lives in Cabarrus County. Since her retirement she’s been making and selling soaps at festivals and events. She attends six or seven shows a year. Smiling buys ingredients from Ghana and uses essential oils and other natural ingredients to make the soaps.