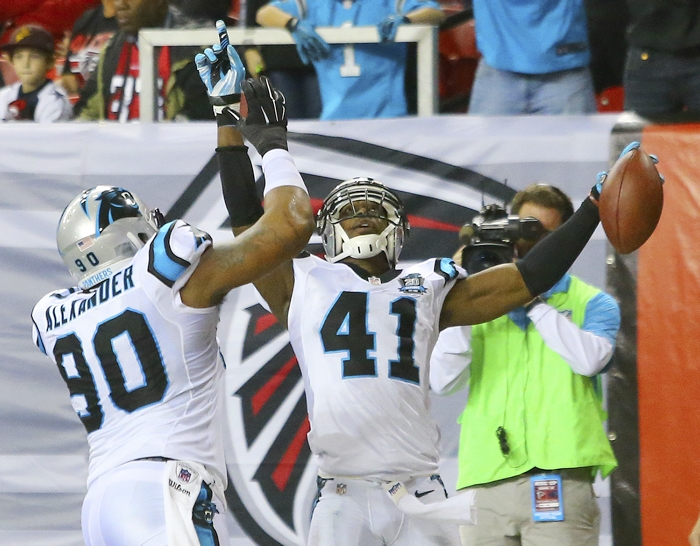 ATLANTA  — The Carolina Panthers‘ big-play defense appears capable of making a difference in the playoffs — even for a team with a losing record.

Roman Harper and Tre Boston returned interceptions for touchdowns and Carolina recorded six sacks, leading the Panthers to a 34-3 victory over the Atlanta Falcons on Sunday to win the woeful NFC South.

Carolina (7-8-1) will host Arizona in a wild-card playoff game next Saturday. The losing record didn’t keep the Panthers from celebrating their first back-to-back playoff seasons in franchise history.

“It feels great,” Carolina running back Jonathan Stewart said. “I mean, it’s a blessing and you just have to cherish these moments right now. … We just believed and played our hearts out and this is where we are.”

The Panthers have won four straight, but still they are the first team to enter the playoffs with a losing record since 2010, when Seattle was 7-9.

Harper scored on a 31-yard return in the second quarter and Boston clinched the win with his 84-yard interception return late in the third quarter. A 33-yard fumble return by Thomas Davis set up another touchdown.

“It was a great defensive effort,” Rivera said.

The Panthers‘ celebration began with their final timeout with 2:41 remaining. Quarterback Cam Newton lifted his arms toward Carolina fans who moved close to the field to claim seats vacated by Falcons fans.

After the game, Newton answered fans who called his name by running back to the edge of the stands to give fans high-fives.

Newton completed 10 of 16 passes for 114 yards, including a 5-yard touchdown pass to Ed Dickson in the first quarter. Newton also had a 4-yard scoring run. Stewart ran for 49 yards on 13 carries.

The Panthers did not have a turnover.

The Falcons (6-10) were booed as they finished their second straight losing season under embattled coach Mike Smith. Atlanta is 10-22 since falling to San Francisco in the 2012 NFC championship game.

Smith acknowledged the results have not met the standards he set with winning records in each of his first five years.

With a playoff spot — and perhaps Smith’s future — on the line, the Falcons committed three turnovers, did not force a turnover and were held without a touchdown.

Atlanta’s best chance for a touchdown ended when fullback Patrick DiMarco was open in front of the goal line in the first quarter but dropped a short pass from Matt Ryan.

Smith said he was “very disappointed” and called the performance “not acceptable at all.”

Carolina dominated the first quarter, running for 105 yards and holding the ball almost 12 minutes. The Panthers led only 10-3 before the defense stretched the lead with Harper’s interception return on Ryan’s pass intended for Roddy White.

On Atlanta’s next possession, White fumbled following a catch when hit by linebacker Adarius Glanton. Davis picked up the loose ball and returned the ball to the Atlanta 9. Newton’s touchdown run pushed the lead to 24-3.

Boston added his long return late in the third quarter.

Falcons starting running back Steven Jackson was inactive with a quadriceps injury. Jacquizz Rodgers and Devonta Freeman combined to run for only 57 yards.

The Panthers improved to 15-3 in December games since Rivera was hired in 2011.

It was a familiar setting for Newton and the Panthers, who also clinched their 2013 playoff berth with a Week 17 win at Atlanta. The Panthers had nine sacks in that 21-20 win, and the pass rush was similarly effective on Sunday.

NOTES: Panthers RB DeAngelo Williams (broken hand) was inactive. … Falcons safeties Dwight Lowery (knee) and Kemal Ishmael (hamstring) left the game. Ishmael started for William Moore, who was placed on IR with a shoulder injury this week. … Panthers DE Charles Johnson, a former University of Georgia star, had a sack in his fifth straight game at the Georgia Dome. … The Falcons took their first loss of the season against a NFC South opponent.