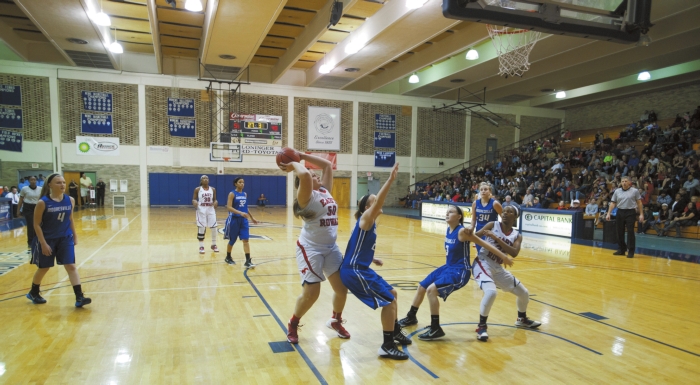 There was no fire, except maybe in the hot hands of Kelli Fisher and Shennell Pharr. They scored 16 points each to pace the Mustangs to a solid 58-40 victory.

An altercation on the concourse, not in the gym, led to the alarm going off. When sirens wailed and lights flashed, East Rowan had already sprinted to a 14-2 lead with a triangle-and-two defense that slowed down guard Amber Sherrill and forward Ashley Cullen and handcuffed the Blue Devils.

Top-seeded East Rowan (10-1) meets sixth-seeded North Rowan (5-3) at 6 p.m. in the girls championship final. The Mustangs  lost 71-40 to the Cavaliers a year ago, but this should be tremendous game.

The Mustangs were so proficient offensively and defensively for the first 13 minutes that they built a 30-9 lead against the fourth-seeded Blue Devils (6-4).

“Our defense rattled them some early,” East Rowan coach Danielle Porter said. “I hated we had that delay because it gave them a chance to adjust.”

Mooresville had a run late in the first half keyed by two 3-pointers by reserve Carlee Brawley and climbed within 30-17 at the break.

The Mustangs held Mooresville to 19.7-percent shooting from the field and the Blue Devils only made half of their free throws.

“We had four starters shoot 6-for-41, and that was because we didn’t take the shots we needed to be taking,” Mooresville coach Andy Sparks said. “We just never found a rhythm.”

East Rowan isn’t known for outside shooting, but the Mustangs made five 3-pointers. Jocelyn Lowe hit one early, and Pharr and Ajayi hit two apiece.

“I hit some I didn’t think I’d hit,” Ajayi said with a laugh.