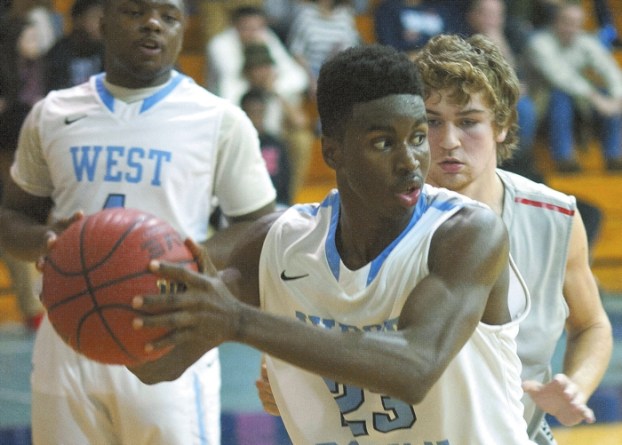 SALISBURY — West Rowan boys coach Mike Gurley says Greg Joseph occasionally has a moment in practice where he grabs a defensive board and then sets sail as a solo act from end to end.

“Usually Greg kicks the ball out of bounds,” Gurley joked. “That’s when we remind him not to go into ‘Bron Bron’ mode on us.”

“Bron Bron” is one of the nicknames of NBA superstar LeBron James.

With the score tied at 35-all in a tense Sam Moir Christmas Classic semifinal Monday, Joseph went into “Bron Bron” mode, and Gurley is glad he did. Joseph made the play that decided the Falcons’ 37-35 victory over South Rowan.

When South Rowan’s Qwan Rhyne missed a jump shot, Joseph went high for the board and took off dribbling. He nearly lost the ball twice, but he finished his journey with a tremendous, acrobatic shot in the lane. Joseph was 0-for-5 when he took off didn’t prove a deterrent to his heroics.

“I’d been missing shots all game, but I didn’t let that get my confidence down,” Joseph said. “I looked up at the clock, and saw there was still 11 seconds, and I decided to take a chance.”

With 2.3 seconds left, he hit the game-winner.

Then Rhyne just missed a contested jumper before the final buzzer.

“My heart jumped when Qwan released that shot,” West Rowan guard Kortez Weeks said. “I thought it was in.”

It was an unusual game. The low score was attributable not only to poor shooting percentages — both teams were below 30 percent — but to clawing defense on both sides.

“It may have looked ugly, but it looked that way because two teams were fighting on every possession,” Gurley said. “It was ugly because it was beautiful. South Rowan’s defense was good, and our defense was good. It was a gut-check, and we just kind of willed ourselves to win.”

West Rowan led 7-5 after a quarter. South Rowan took a 15-8 halftime lead after the Falcons suffered through a one-point second quarter.

“Both teams got after it,” South Rowan coach Bryan Withers said. “Nerves also played a part on it. We just didn’t shoot well.”

The Falcons led 24-23 after three quarters, but the eighth-seeded Raiders went in front 31-28 after Eric Finger made two free throws with 3:45 remaining.

Two Celexus Long free throws provided a 35-33 lead for the Falcons with 1:09 left, but Rhyne made it 35-all with a soft jumper with 55 seconds remaining.

Finger battled for a rebound that gave South Rowan possession with the score tied with 30 seconds left.

“Tie game and we’ve got the ball — all the cards in our back pocket,” Withers said. “The worst that shouldve happened is overtime, but their guy (Joseph) made a tough shot. Then Qwan almost makes one for us. He thought it was in.”

South Rowan will play Davie for third place at 4:30 p.m.